Eagles Flyers Phillies Sixers About Us Write For Us
Ben Simmons suffers fracture in right foot
Eagles Focus: 7 Most Admirable Stats and Accomplishments 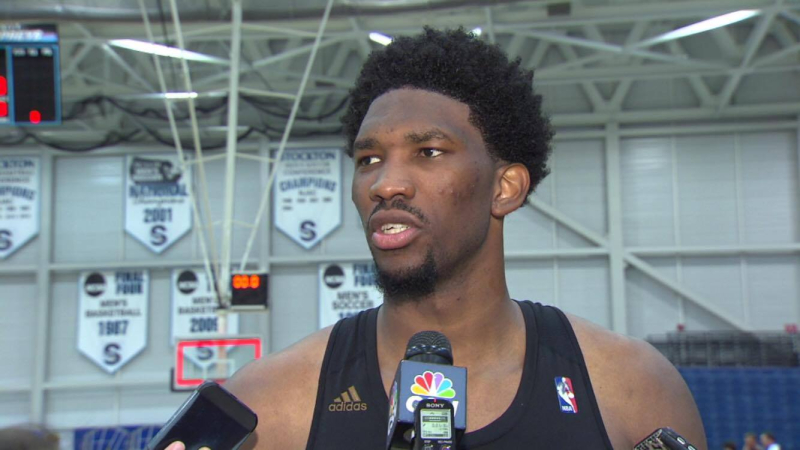 Philadelphia 76ers head coach Brett Brown sat down for an interview with Mike Missanelli on Friday, four days ahead of their preseason opener against the Celtics on October 4 at the University of Massachusetts. Brown revealed his starting lineup for the game.

This announcement came prior to the team finding out the Ben Simmons suffered a fracture in his right foot after rolling his ankle on the final day of camp.

Obviously the eye-opener here is that Joel Embiid is in the lineup. While many fans have him as the opening night starter at center, his absence from five-on-five basketball since March 1, 2014 has had the Sixers playing it safe, with expected minute restrictions and not playing back-to-backs. Tuesday will not be any different.

“I’m going with him in like 4 minute bursts,” Brown said when talking about how he plans on handling Embiid’s minutes. “So much of it is ‘I want you to push yourself to the absolute max, how can I get the best of you for short durations and grow your fitness base?’

“I think that I’m at a stage where I can get 4, maybe 5 but definitely 4, minutes where he just flies up and down the court and is going 100%, offensively and defensively,” Brown said when talking about Embiid’s conditioning. “Then at that point you can just see it. There’s a fatigue factor, an unfamiliarity with the speed of the game that creeps in quite quickly. So 4 minute bursts is sort of the fence that I’ve put him in right now.” [Philly Mag]

With Embiid starting, the Sixers have two young, capable big men coming off the bench in Nerlens Noel and Jahlil Okafor while Sergio Rodriguez is likely to lead the second unit off the bench. With Ben Simmons' injury, Dario Saric could end up starting in his place on Tuesday.