Iverson on Embiid: "I knew he was going to be great" 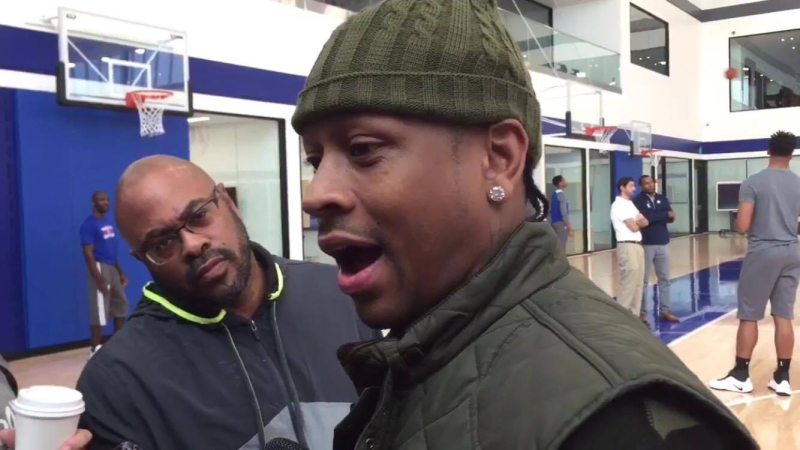 The Philadelphia 76ers are coming off another disappointing close loss at the hands of the Indiana Pacers, but per usual with this team, you take it as a learning experience and move on. The Sixers got a nice treat at practice this morning in the form of a visit from Hall of Fame guard Allen Iverson. 'The Answer' stopped by practice on Thursday morning offered his thoughts on rookie center Joel Embiid.

"I knew he was a great big, I knew it," Iverson told reporters. "I watch basketball players, so I knew he was going to be great and he'll be greater, only get better and you know, he'll make the guys around him that as well."

Iverson spoke to the team following practice and also said the he hopes the fans continue to be patient with the young guys, because they have the talent to be great.

Meanwhile, Joel Embiid will be back on the court when the Sixers host the Pacers on Friday night. It'll be a rotation of him and Richaun Holmes with Jahlil Okafor 'in the bullpen' as Brett Brown phrased it, similar to the game against Orlando. Although he likely won't play, Joel Embiid is on track to travel with the team to Atlanta on Saturday during the second game of a Sixers back-to-back. He has yet to travel with them on either of their first two road games this season in Charlotte and Indiana.

Minutes restrictions were also a topic of discussion after Thursday's practice. While Joel Embiid will be on a 24-minute restriction until at least Christmas, Brett Brown said that the situation with Jahlil Okafor will be 'more fluid' with the potential for an increase soon.