Eagles Flyers Phillies Sixers Union About Us Write For Us
Flyers Cut 18 Players, Roster Down to 36
Jahlil Okafor is on the trade block...again

Philadelphia Union: Derrick Jones has failed to break out this year

For the Philadelphia Union, this was supposed to be a breakout season for Derrick Jones.

The midfielder was coming off of a strong season in Bethlehem where he was the first signing in team history and was poised for success leading into the season. Jones had a strong preseason and came out the gate to enter the starting lineup in the first game of the season, a matchup with the Vancouver Whitecaps. In that game, Jones was a defensive monster covering the defensive half of the field for the Philadelphia Union while allowing the team to operate higher up the field. While the game ended in a 0-0 tie, take a look at the work put in by Jones on defense in the game courtesy of MLS Match Center. 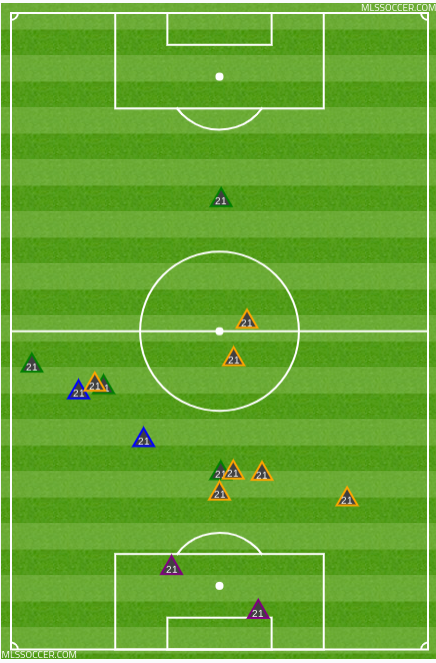 Looking at this chart, you may think that Jones was on his way to being the starting defensive midfielder on the team after putting in a shift like that and you would be mistaken. Jones would go on to make 10 more appearances (eight starts) heading into the upcoming game versus the Chicago Fire.

While the Philadelphia Union struggled to start the season, Jones shined as a bright spot on the team but following the April 30th draw versus the Los Angelos Galaxy, Jones was dropped from the lineup in favor of moving Alejandro Bedoya into the eight role on the team. Bedoya had struggled as an attacking midfielder and Jim Curtin needed a way to get his million dollar man going on the season.

Jones was also on his way to join the US U-20 national team for the U-20 World Cup in Korea. During that tournament, Jones played a large part in the team's run to the quarterfinals. But when Jones returned to the Union from the tournament, he was left without a spot in the starting 11. Bedoya and Haris Medunjanin had built up chemistry in the midfield pivot and as a result, Jones had to sit on the bench.

Since returning from the World Cup, Jones has only made two starts filling in when Alejandro Bedoya missed time. Due to the health of Warren Crevalle this season, Jones hasn't even been able to log many minutes at Bethlehem Steel to keep him fresh in case he was needed. For a young talented prospect, it's hard to justify them seeing a large drop in minutes from one year to the next.

Guys like Derrick Jones need to play consistently for Earnie Stewart's plan and repeated vision of this team standing on the Acadamy to work. But that's what makes the tactical decisions in the tie Sunday versus New York Red Bulls even weirder. When Jim Curtin realized that a tie would be the best result that he could get from the game, he inverted his midfield triangle switching from his favored 4-2-3-1 to a 4-1-4-1/4-3-3 hybrid formation. That shift also coincided with Warren Crevalle being brought on for Ilsinho to play a true central defensive midfielder.

Jones didn't even travel to that game which is weird on its own. While Crevalle is a great player, he is essentially Derrick Jones with less range and should not be considered part of the team's long-term future. Yet, Jim Curtin still says things like this:

Curtin says that we might see more of the inverted triangle down the stretch, Creavalle sitting behind Medunjanin-Bedoya

That spot should be Jones' and if there is a reason why he can't play it this late in the season it should be concerning to the future of the Philadelphia Union. They will never be able to spend to take the Atlanta United approach and spend their way to victory unless the team is sold to new ownership (not touching it guys). The way that this team will succeed is by following the Real Salt Lake path with a coach who will put faith in their kids. If Jim Curtin won't do that, it's time for a change (can we clone Mike Petke, please? pretty please?).

Johnathan Tannenwald of Philly.com wrote an article on Curtin's process with the youth and some of the quotes are concerning. Here's one on Jones in particular:

“Everybody goes through highs and lows of a season,” Curtin said. “Derrick is an example of a guy who had a great start to the season [and] has hit a little bit of a wall — which is natural for a young player. Now how he responds down the stretch will be important to show where he’s at for his future.”

Jones showed that he could succeed in Bethlehem last year and promoting him to the first team & following that with demotions to Bethlehem has to be affecting him mentally. The gameplay in USL is completely different from that of MLS and Jones' game time should be dictated by his performances in practice. According to Curtin, he's been fine in training which makes you wonder why the team is being so cautious with Jones.

The Philadelphia Union may technically still be in the playoff race, but let's not fool anyone, they won't make it above the red line. As the Philadelphia Union slide down the standings, it's the perfect time to see what they have in their youth. Some players perform better against better competition because they're bored in the lower divisions. Take a page from the Philadelphia Phillies and play your kids.

While the sink or swim mentality may be hit or miss, it's better for the Union to see what they have now before heading into the offseason to tailor their needs around theirdiamondss in the rough. This offseason is a critical one and seeing if the kids are actually alright can help direct the large influx of cash to real positions of need.