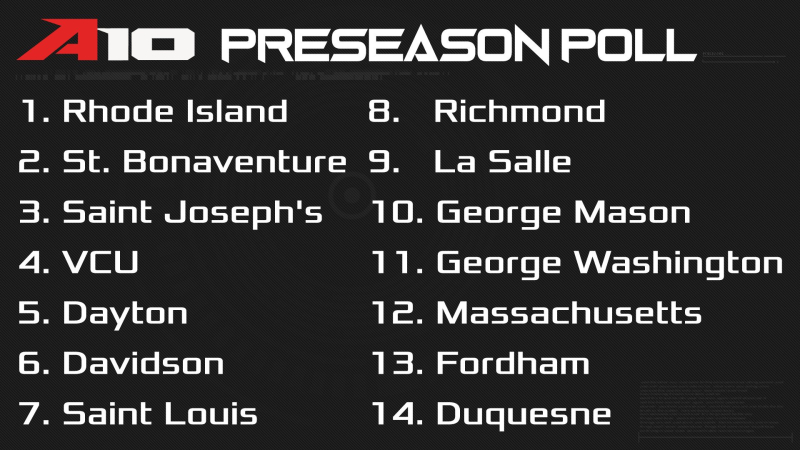 The Hawks are riding on one thing as a team this season, the health of Shavar Newkirk. With him, they were 7-5 last season and without him, they were 4-15. Newkirk has a decent shout at being A-10 player of the year this season after averaging 20.1 points per game last season but in his absence, it was a freshman that grew the most for the Hawks.

Charlie Brown stepped up in a big way for the Hawks in a big way en route to an A-10 all-rookie selection. Brown averaged 12.8 points per game and thrived as the primary scorer for the Hawks. This season with the return of Newkirk and Lamarr Kimble, St. Joe's could have a three-headed monster on offense which led to the Hawks being selected to finish third in the A-10 Coache's Poll.

Here's what the had to say about the Hawks:

"Hampered by a slew of injuries last year, Saint Joseph's returns an experienced fore of players and is picked third in this season's poll. Newkirk and Kimble, both of whom suffered season-ending injuries last season, return for the Hawks, as does last year's All-Rookie selection Charlie Brown, Jr. The three are preseason all-conference selections, leading to the Hawks earning 300 points in the poll."

While the Hawks could be good this season, a lot is riding on the health of people who suffered season-ending injuries. The non-conference schedule will be about shaking off the rust for these guy's to ease into the gauntlet for the conference season. Saint Joe's can be good but expectations should be tempered.

There is a lot to like about the Hawks but it's a long road to the top of the conference. If Newkirk is fully healthy, it'll be tough to stop these Hawks.