Eagles Flyers Phillies Sixers About Us Write For Us
John DeFilippo to be named Vikings' new offensive coordinator
In first presser in two months, BC gives frustrating report on Fultz

Sixers looking for another win against Pelicans 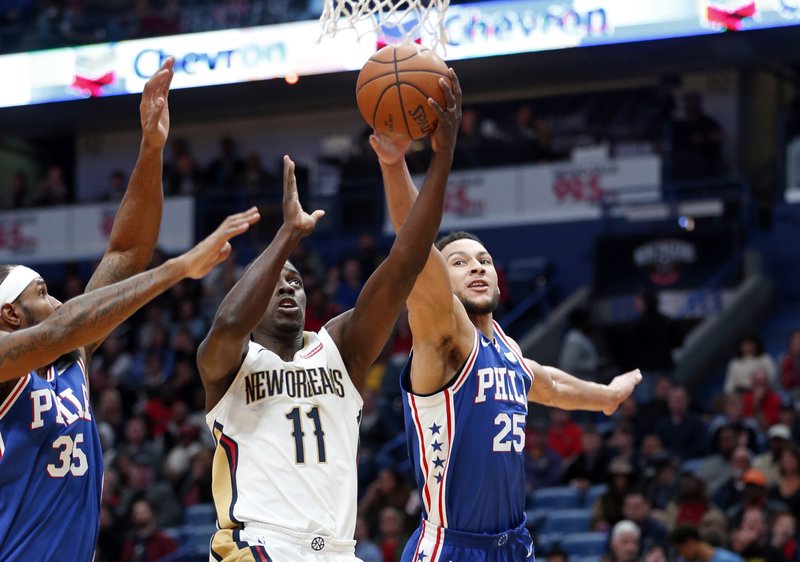 The Philadelphia 76ers are set to take on the New Orleans Pelicans, who have had quite the past couple of weeks. The Sixers are coming off of a wonderful win over the Washington Wizards. Almost from the start, it looked like the Wizards stood no chance. Of course, they were without John Wall, so that played a role. Still, the Sixers looked dominant against a playoff team. Always a good sign.

The Pelicans would've been coming off of a game against the Indiana Pacers at home but their arena, the Smoothie King Center, had a leak in the roof.

Eventually, after a delay, it was determined to postpone the game. Sixers fans may remember the Sixers and Sacramento Kings had a similar postponement, although the court was wet thanks to those blasted Philadelphia Flyers playing earlier in the day.

While people likely assumed it was water that was leaking, perhaps there was a chance it was actually a leak of smoothie. Possibly strawberry-banana.

It's no secret that the Pelicans lost DeMarcus Cousins to injury for the rest of the season. This season was already somewhat of a letdown in terms of expectations. Nobody thought they were contenders, but they were supposed to be easily in talks of making the playoffs.

Since Boogie (huh...rhymes with "smoothie") went down, the Pelicans have gone 1-5. They're still 28-25, but have dropped to 8th in the Western Conference. The Los Angeles Clippers are a half game behind them, so Pelicans losing tonight would potentially put them in a tight spot.

Still, without Cousins, this slump may continue for a good while. However, they did grab Nikola Mirotic from the Chicago Bulls. He's a big who can shoot, among other things. He's simply an awesome pickup for the team, considering all of the issues they've had to deal with, with Cousins. Is he enough to help keep the team afloat?

Both the Sixers and Pelicans are sitting 8th in their respective conferences. As mentioned before, the Pelicans are a half game ahead of 9th. The Sixers are actually tied with the Detroit Pistons in terms of games back, but they've actually played two more games than the Sixers and have a very slight disadvantage in winning percentage.

However, the Pelicans are a half game behind the Denver Nuggets. The Sixers are one game behind the Miami Heat. So, both of these teams are in a desperate place where a win could drop them out of the top eight, but a win could put them to 7th. Who will hold the 8th seed? Who will drop?

It's only February, but there are only 29 games left for the Pelicans and 30 games for the Sixers. Over half of the season is over and seeding is becoming a greater focus. The Sixers need to ensure they don't look back at this game as one they could've, but didn't take. Both of these teams are in the same boat. Teams ahead of them don't want to drop to the edge and teams behind them have their metaphorical snipers ready to take that 8th seed team out.

The difference between these two teams is that the Pelicans are heading down while the Sixers seem to have a real chance to make a run.

A key match-up is the power forwards and centers on the team. Dario and Joel going up against The Brow and Mirotic is bound to be an exciting match-up.

To be honest, the Pelicans' duo scores more points, shoot better from the field, alongside 3-point range, steal and block more, and take care of the ball much better per game.

The Sixers' duo has more assists and rebounds per game. Cool. The Per 36 numbers come to the same conclusion.

Wanna use advanced stats? Sure!

Davis-Mirotic has a better PER, TS%, TOV%, STL%, BLK%, and more Win Shares. Embiid-Saric has better TRB% and AST%. So, the advanced numbers reflect the per game and per 36. Embiid-Saric rebound and pass well. Everything else they fall behind against Davis-Mirotic.

Davis is the best player on the court for this game, but Joel is very capable of going toe to toe with the star player. Both of these big men change the game for their teams without question or doubt. Saric and Mirotic are two solid starter type players who are not afraid to get their hands dirty and work hard. They can pass and shoot. This is such a beautiful match-up to look forward to.