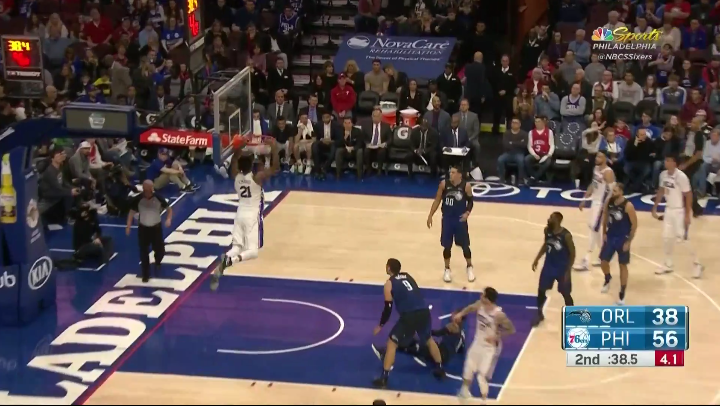 Joel Embiid's 30th double-double of the season led the Sixers to their seventh straight victory, beating the Orlando Magic by a score of 116-105 on Saturday evening at Wells Fargo Center.

Former Sixers' first round pick Nikola Vucevic opened the scoring, and helped Orlando race out to an early 9-2 lead over the Sixers.

With the Sixers dragging early in the game, head coach Brett Brown elected to insert Richaun Holmes into the game over Amir Johnson who normally gets the bulk of minutes as the backup big man. Holmes's energy sparked the Sixers to a 6-0 run that allowed the Sixers to make it a 15-12 game.

Once in striking distance the Sixers did not look back, and took a 19-18 lead after a Robert Covington three pointer.

The Sixers cruised through the first quarter on the back of a suffocating 21-3 run and took a 27-18 lead into the second quarter despite trailing by seven earlier in the quarter.

With Embiid out, the Sixers continued to dominate and build a gigantic lead. Robert Covington shouldered some of the burden by hitting three three pointers in the second quarter to help the Sixers stretch the lead to as many as 23 points.

Embiid (19 points, eight rebounds), Covington (12 points) and Ben Simmons (10 points) all reached double figures in the first half for the Sixers.

Nikola Vucevic was the only player to hit double figures for Orlando in the first half with 10 points. The Sixers went into halftime with a comfortable 58-40 lead.

Orlando got hot from three and used an 11-2 run in the third quarter to trim the Sixers lead to 13.

The Sixers and Magic traded baskets after the Sixers began to tighten up defensively. A pair of Mario Hezonja free throws brought the Magic within 12 of the Sixers lead – the closes that they would get in the third.

Joel Embiid once again took over to take the Sixers off of the ropes, with nine points in the quarter, which included a turnaround fadeaway along the baseline after he corralled an offensive rebound. Embiid followed up that possession by swatting a Shelvin Mack shot.

After Mack was blocked the Sixers forced a shot clock violation. T.J. McConnell then raced down the floor to get a lay in just before time expired, sending the Sixers into the final quarter with an 87-71 lead.

The Sixers continued to impose their will on the Magic in the fourth, with six quick points from Ben Simmons all but signaling the end for Orlando. All five Sixers starters had exited the game with six minutes remaining in the fourth quarter.

With the Sixers starters pulled from the game with tomorrow night's matchup with the Washington Wizards in mind, Frank Vogel left his starters in the game to try to make a late run.

Orlando shrunk the Sixers' lead to nine with the second unit being forced to rise to the occasion. Marco Bellinelli got hot and staved off the Orlando push to help guide the Sixers to a 116-105 victory.

Joel Embiid led the way with 28 points and 14 rebounds just 26 minutes, registering his 30th double-double of the season. Embiid is the first Sixers' player with 30 double-doubles in a season since Chris Webber in 2006.

The win was the Sixers' seventh straight game and 12th straight at the Wells Fargo Center. With the win the Sixers are a half-game behind the Milwaukee Bucks for the sixth seed in the Eastern Conference and one game behind the Washington Wizards and Indiana Pacers for the fourth seed. Milwaukee, Washington, and Indiana are all idle tonight, and the Sixers get to play the Wizards tomorrow night to continue their push up the standings.