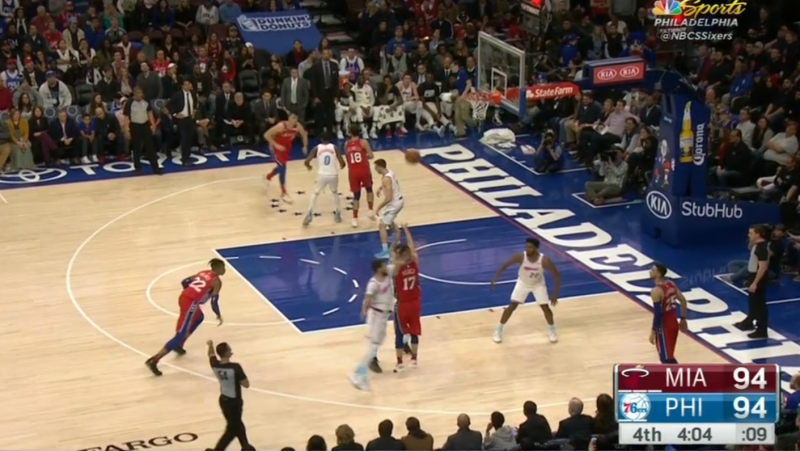 The Philadelphia 76ers (30-25) completed a miraculous 24-point comeback to beat the Miami Heat (30-28) without Joel Embiid at Wells Fargo Center. Usually on the opposite end of these situations, the Sixers stormed back after at one point trailing 68-44 in the third. The Sixers finish undefeated in their five-game home-stand and win their 11th straight game at Wells Fargo. The game started off close until the Heat took control of the game in the second quarter. With nine minutes left in the third, things got interesting.

In the first quarter, there were three lead changes and it looked like the game had the makings of a back-and-forth affair. Hassan Whiteside and Goran Dragic started off strong, combining for 14 points in the quarter for the Heat. The Sixers had a balanced scoring effort in the quarter and Trevor Booker's tip-in with 0.3 seconds left cut the lead to 29-20 heading into the second. Things got messy for the Sixers in the second quarter.  T.J. McConnell and J.J. Redick both picked up technicals at the beginning of the quarter and the Heat scored the first six points. The first half ended with the Heat ahead 62-39, outscoring the Sixers 33-19 in the second quarter.

The third quarter began like we were going to see more of what we saw in the second. Dario Saric (19 points, eight rebounds) started the quarter off with a triple but Josh Richardson answered right back with a three of his own. Saric then made two free throws but Tyler Johnson drilled a trey to push the Miami lead to 24 points at 68-44.

The Sixers responded with a 12-0 run with a flurry of baskets off a three-pointer and 21-footer by Redick, Saric three, Simmons layup and Robert Covington jumper. The lead hovered around 15 points until the 2:46 mark when the Sixers decided it was time for another run. They outscored the Heat 10-2 to cut the lead to 81-73 going into the fourth. Dario Saric scored 14 of his 19 points in the quarter.

Newly acquired Marco Belinelli (17 points in 28 minutes) scored the first three baskets of the fourth for the Sixers (all threes) as the Sixers trimmed the lead to four. They took the lead off Simmons' dunk with 5:15 left in the game. The Heat tied it twice more, but a Redick three to put the game at 97-94 gave Philadelphia the lead for good. Miami cut the lead to 100-99 with 1:26 left before Redick hit a clutch off-balance jumper with 20 seconds left. Ro-Co made two clutch free throws with 13 seconds left and Tyler Johnson made a three just in time for the Sixers to give the ball back to the Heat with a 104-102 lead and 3.3 seconds left. Dwayne Wade let go a jumper for the win at the top of the key…which rimmed out. Whew.

The keys to the comeback were the rebounding dominance of the Sixers and the stellar play of Simmons.

Without Embiid, rebounding was pivotal and the Sixers outrebounded the Heat 60-29 with a 23-3 advantage on the offensive glass.  Simmons had 12 rebounds, Saric had eight, Holmes and Booker each chipped in with nine and Covington and Redick each had seven.

.@sixers G-F @BenSimmons25 has his sixth triple-double of the season. He is third in the @NBA behind only @russwest44 and @KingJames.

His six triple-doubles are the most by a rookie in a season since @MagicJohnson had seven in 1979-80.

The dramatic victory puts the Sixers one and a half games ahead of the Heat in the playoff race as the seventh seed. And, although the Flyers lost yesterday, the Sixers are still undefeated since the Eagles won the Super Bowl.

The Sixers have a break for All-Star Weekend until Thursday, Feb. 22 when they travel to face the Chicago Bulls.

View All Posts By Sean McBryan

View All Posts By Sean McBryan