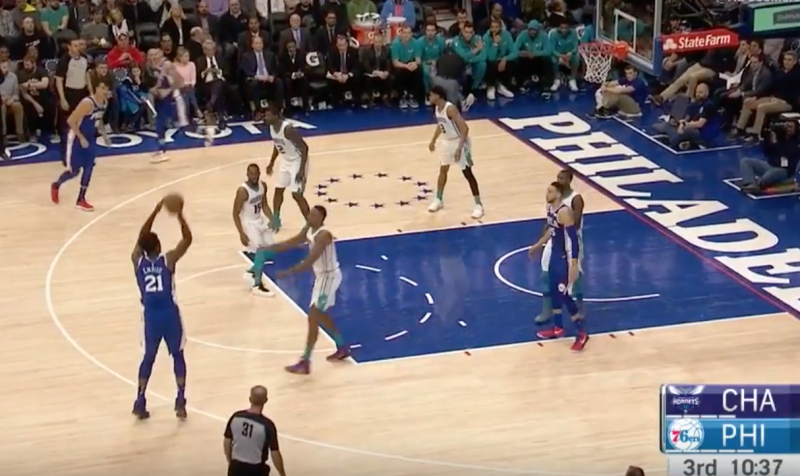 Riding a two game win streak into Monday night, the Philadelphia 76ers (39-30) rode the win train back into the Wells Fargo Center with their 108-94 victory over the Charlotte Hornets (30-41).

The Hornets stuck around looking for an upset for most of the night, but Joel Embiid and Ben Simmons struck gold and led the Sixers to glory for win No. 39 of the season.

Turnovers have been the theme of the year for the Sixers, and while they struggled at times against the Hornets to keep their paws on the rock at all times, the turnovers didn't ultimately impact the outcome of the game.

Joel Embiid, poised and ready, once again had a solid showing despite the amount of times he turned the ball over to the Hornets. It was a nine turnover night for Embiid, but it was highlighted by 25 point and 19 rebound performance.

The craziest stat of the night surrounding yet another classic Embiid outing was the kind of history the 24-year-old found himself a part of by night's end.

Joel Embiid is the first Sixer since Charles Barkley in 1991 to have 20 points and 19 rebounds in two straight games.

But besides Embiid's 19, the Sixers as a team thrived on the glass, collected 60 total boards to go along with 30 assists.

Tonight was @sixers first game with at least 60 rebounds and 30 assists since Dec. 4, 1985 against the Washington Bullets.
H/t @bball_ref

Simmons got hot and got his third triple double in his last four games, nine on the season. His nine triple-doubles are the most by a Sixers player since Wilt Chamberlain had 31 in 1967-68.

Simmons finished with 11 points, 12 rebounds, and 15 assists, with three steals added in.

The Sixers hoped that they could have a strong showing from Dario Saric, who has been the most consistent Sixer this season on offense, but he struggled to get anything going, shooting 2-of-9 from the field for five points, with three assists, and a rebound. All those struggles, but Saric still mananged to stay a +33 on the floor, leading the team.

The Sixers' main story, besides the outstanding play from Simmons and Embiid, was their 3-point shooting. Embiid and Robert Covington both made four 3s, with Cov shooting 4-of-9, Embiid 4-of-6.

Marco Belinelli made his presence known early on with a slam dunk that sent the Wells Fargo Center crowd into a frenzy, and his late-game heroics from beyond the arc, in which he went a stellar 5-of-9 from downtown for 21 points off the bench.

The Sixers finished the game shooting 40.9 percent from downtown, sinking 18 of 44 shot attempts.

.@sixers tied franchise record with 18 three-pointers tonight. Previously did so on Nov. 3 vs. Indiana.

The Hornets needed big nights from many of their players, especially with forward Nicolas Batum missing action due to achilles tendinitis.

They got one from Kemba Walker, who shined scoring 24 points on 19 attempts. However, Walker only managed to gather one 3-pointer on nine attempts from the field. Jeremy Lamb had 14 points, Dwight Howard 10.

Off the bench for Charlotte, it was Willy Hernangomez leading the way with 17 points, Malik Monk adding 13 points with three 3-pointers. The Hornets struggled hitting their perimeter shots, only tallying six 3-pointers on 22 shots.

Sixers will play host to the Grizzlies on Wednesday night, looking to go 16-1 at the Wells Fargo Center in 2018.