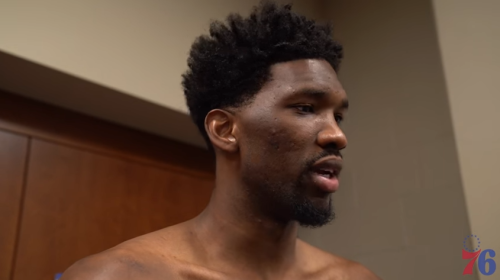 The Sixers are coming off of back-to-back dominating efforts against the lowly Grizzlies and Magic. They have won five in a row, are currently fourth in the East and their magic number is now just one. A win on Saturday night against Minnesota or a Detroit loss will give Philadelphia their first playoff berth since the 2011-12 season. The goal at the beginning of the season for the Sixers was to make the playoffs and that will become a reality very soon. Now that the postseason is more or less locked up, Joel Embiid has a new goal for the team. Win 50 games.

After their win against Orlando on Thursday, the Sixers are 41-30 with 11 games to play. They would have to go 9-2 the rest of the way to reach the 50-win plateau. It's not an impossible feat with the upcoming schedule for Philadelphia. Over the final 11 games, they play seven against teams under .500 in the Knicks, Atlanta twice, Brooklyn, Charlotte, Detroit and Dallas.

The only games remaining against teams above .500 are Saturday against Minnesota, Monday against Denver, April 6 against Cleveland and April 11 against Milwaukee. If they don't reach 50 wins in the regular season, they'll likely have a chance to get to that mark in the playoffs.

Embiid has gotten the luxury of being able to sit the past two fourth quarters due to the big leads built by him and his teammates. He scored 14 points to go along with seven boards against Memphis in 20 minutes before tallying 17 points and nine rebounds in 20 minutes on Thursday in Orlando.