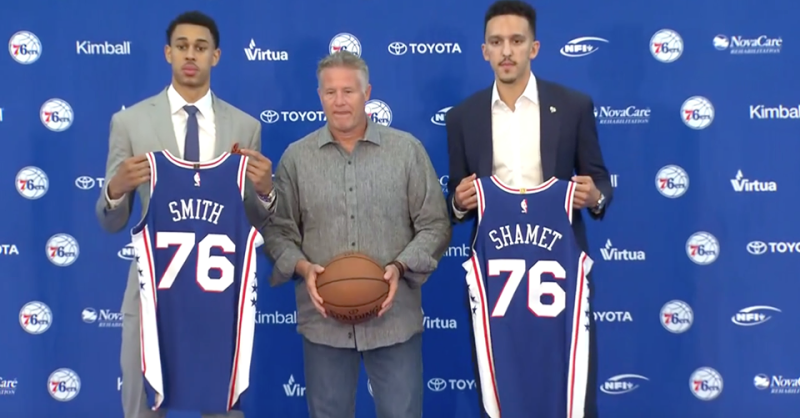 "One of the values that were most important to us, as we decided how to grow this team and select our players, there was none more important than just good people and character," Brown said of Smith and Shamet. "Personally, when you had seen me work the players out, and intermittently we would call people into my office, there was a connection and a comfort level that I had just talking to them as people."

The 76ers' draft night acquisition of Smith — along with a 2021 first-round pick — came with much criticism among media and fans, as the organization sent their No. 10 overall pick and two-time Villanova Wildcats NCAA champion Mikal Bridges to the Phoenix Suns. The Sixers drafted Shamet, who fractured his left foot in 2015, 16 picks after Bridges. Brown cites talent as the "real reason they're here," with Smith averaging 11.3 points, 5.0 rebounds and 1.8 assists, and Shamet averaging 14.9 points, 3.2 rebounds and 5.2 assists in their collegiate careers.

"When you took it further, in the real reason they're here, is talent. Their ability to grow into NBA players ... the ability we felt that their base foundation had so much more room to grow," Brown said. "The notion of how we play here in Philadelphia. The values that we have on defense, how we want to play offense, how we all look into a crystal ball and suspect this sport is going to be played in 2025, when you added those up, it made perfect sense in aggressively targeting these two players."

Smith and Shamet represent two of three players the team acquired during the 2018 NBA Draft on Thursday. No. 54 overall pick Shake Milton (Southern Methodist), a guard acquired from the Dallas Mavericks, was not available at the press conference.

Brown said the players themselves will relay their expectations of roles and minutes in regard to fitting into the 2018-2019 roster.

"They're going to tell me. We got a summer league coming up. They will have ample opportunities to draw their own line in the sand and show their teammates and coaching staff," Brown said. "I feel incredibly comfortable when you study their style of play and their skill package, they're both excellent fits to how we play basketball."

The Sixers will partake in the Las Vegas NBA Summer League, July 6-17 at the Thomas & Mack Center and Cox Pavilion, in Paradise, Nevada.