Another Comeback Falls Short for Flyers in Loss to Rangers 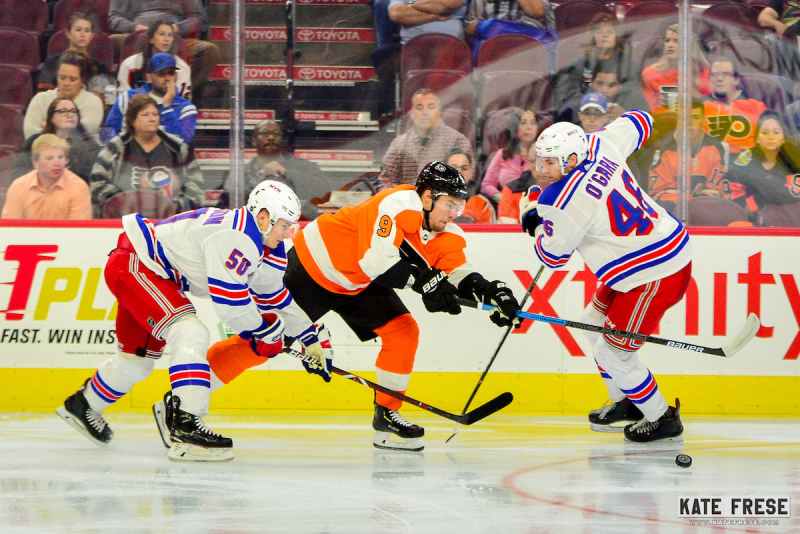 Much like on Monday, the Flyers entered the third after a lifeless period forced them into a sizable deficit. Three Rangers goals in the second had the Flyers down 3-0, just like in Monday's preseason game.

A pair of quick goals got the Flyers right back into it midway through the period, but just like Monday, the Flyers couldn't completely recover and fell short, dropping the final preseason game at home, 4-2, on Thursday night at Wells Fargo Center.

Following a quiet first period that featured limited action, the Rangers took control of the game in the second. The Flyers had outshot the Rangers, 10-4, in the opening 20 minutes on mainly harmless shots. The Rangers opened the second with 55 seconds of power play time.

Just 34 seconds into the period, they struck as Kevin Shattenkirk had a slap-pass tipped by Vinni Lettieri at the side of the net for the game's first goal.

Just 34 seconds later, the Rangers were on the board again. Andrew MacDonald fell in the defensive zone, got up to maintain control of the puck and whiffed on a clearing attempt, creating a turnover. Jimmy Vesey weaved through the slot and dished a pass to the side of the net for a one-timer by Brett Howden to make it 2-0 Rangers just 1:08 into the period.

The Flyers let a power play opportunity come and go in what was a sluggish and sloppy period. Christian Folin took a tripping penalty with 1:17 remaining in the period and the Rangers capitalized before the period was over, getting the goal on a one-timer by Vladislav Namestnikov.

The Flyers were outshot by the Rangers, 12-2, in the second period.

The Flyers came out with more sustained pressure to start the third, but were approaching the halfway point of the period without cutting into the lead. Finally, at 10:01, the Flyers broke the shutout.

James van Riemsdyk made a nice patience play, holding the puck and freezing the Rangers defense before dishing to Ivan Provorov at the side of the net for the easy goal.

Just under two minutes later, the Flyers cut the lead to one as van Riemsdyk's pass went off of Namestnikov and into the net.

That was as close as the Flyers would get though. They failed to take advantage of a power play with eight minutes remaining in the period and the Rangers scored into an empty net with under two minutes to play to seal the game. Kevin Hayes got the goal.

Forward Corban Knight left the game in the second period and did not return. No update was given on his status.

The Flyers close out the preseason on Saturday afternoon against the Boston Bruins on the road. Game time is set for 5 p.m.