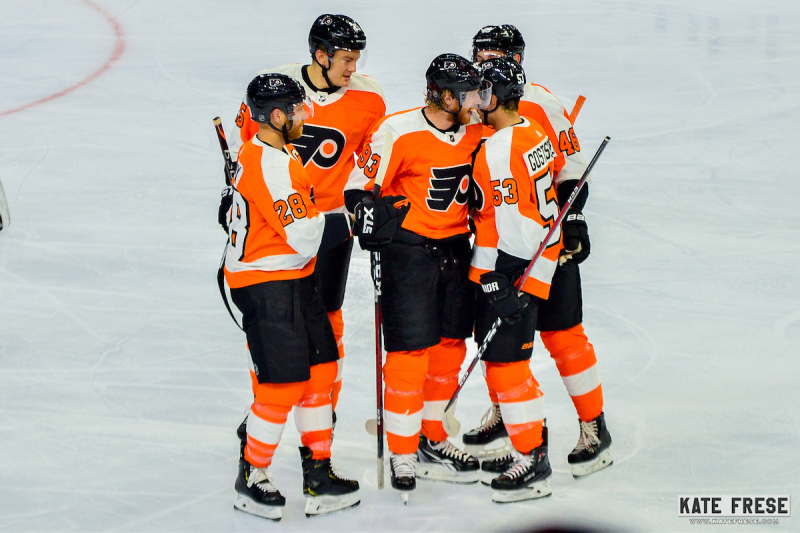 For a lot of veterans, it was the first game action of the preseason. But Shayne Gostisbehere sure looked to be in midseason form.

Gostisbehere scored two power-play goals in the preseason home opener at Wells Fargo Center on Monday night in the Flyers 3-1 win over the New York Islanders.

The Flyers went to the penalty kill in the first minute of the game as Mikhail Vorobyev took a hooking penalty. The Flyers successfully killed off the penalty with several good clears.

Late in the period, the Flyers had only generated four shots on Thomas Greiss. The Flyers were able to strike for the game's first goal on a nice play off the rush.

Ivan Provorov started the play in the neutral, leading Vorobyev into the zone. Vorobyev and Jake Voracek perfectly executed a give-and-go, with Vorobyev showing off his hands and beating Greiss to the blocker side with a snap shot to make it 1-0 at 16:56.

The Flyers got a power play less than a minute later and then got a two-man advantage for 31 seconds after Tanner Fritz caught Gostisbehere with a high stick. With four seconds left on the initial penalty, the Islanders were whistled for cross-checking as well, giving the Flyers extended 5-on-3 time.

In the final minute of the period, they capitalized at 5-on-3. Claude Giroux put a pass in Gostisbehere's wheelhouse for the one-time rocket, giving the Flyers a 2-0 lead with 29 seconds remaining in the period.

The Flyers did not score on carry-over power-play time in the second, but got another power play and took advantage. Gostisbehere struck again, firing a shot from center point to make it 3-0 Flyers at 5:30 of the period.

The Islanders got on the board midway through the period. Mike Sislo got a chance on a breakaway and missed the net high. Ryan Hitchcock was able to center the puck back to Sislo seconds later, and he ripped a one-timer into the net to get New York on the board.

That was the last shot Michal Neuvirth would face. He stopped eight of nine shots before giving way to Carter Hart. Greiss also exited the game at that point, stopping 10 of 13 shots. Jeremy Smith replaced Greiss in goal.

The Flyers had another power play in the second period but failed to score despite some good chances. The team carried a 3-1 lead and 16-13 shot advantage after 40 minutes of play.

The third period was more of a conservative period for the Flyers. They had to kill off two penalties in the period and did so successfully.

Hart stopped all 11 shots he faced in the second half of the game. Smith also held the Flyers off the board for the rest of the game, stopping seven shots.

The Flyers return to the ice for their next preseason game on Tuesday night, traveling to Brooklyn to face the Islanders. Game time is 7 p.m.