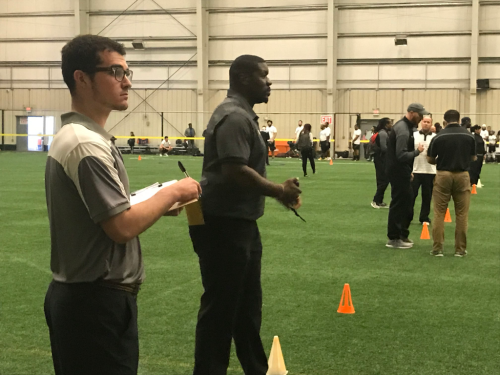 PITMAN, N.J. — Among the National, United, Canadian, and Arena football leagues, Philadelphia Soul General Manager and Assistant Head Coach Beau Bell has experienced — and well-exceeded — his fair share of transitions as both a player and/or coach.

Bell, 32, was drafted by the Cleveland Browns as a linebacker; he was the organization’s first selection of the 2008 NFL Draft, despite being selected in the fourth round. The Browns were far from the putrid team of recent years, as in 2007, they just missed the playoffs with a 10-6 record and the seventh seed in the AFC. Bell played in five games with the Browns as a rookie — weeks 3, 5, 7, 11 and 12 — and recorded three solo tackles, three combined tackles, and one forced fumble. Bell was released during final roster cuts ahead of the 2009 season, and would never play again in a NFL uniform.

“Seeing the old faces is always a great thing,” Bell said. “I wouldn’t say they’re ‘old’ — I wasn’t away too long — but it’s good to be back where I know people.”

On Saturday, under Bell and the other Soul coaches’ careful watch, the Soul held an open tryout at Total Turf Experience in Pitman, New Jersey. They not only wanted to find the next-best athlete to help the team earn its fourth championship in 2019 — but to also offer a second, third and perhaps fourth chance to the 170 attendees, desperate for their ultimate professional football breakthrough.

“Play as much as you can and continue to get in front of people that are going to evaluate you and make decisions,” Bell said. “Playing football is a resume, so if you’re not playing, it’s hard for us to see if you can play football.”

Bell’s own football resume is expansive; his playing days were surely exhaustive, considering the constant and seemingly yearly city relocation. And yet, Bell never gave up. He kept playing.

“I mean, you can come to the tryout — which we want you to come so we can get an evaluation — but that’s just one part of the picture,” Bell said. “We also want you to continue to play football. Continue to play; it doesn’t matter where you’re playing at.”

The open tryout was Bell’s first significant event as the Soul general manager and assistant head coach under Clint Dolezel. Bell said the primary focal point to evaluate the tryout attendees was them doing “the best they can,” and showing “what they have, athleticism, quickness, and speed.”

The Soul plan to hold at least one more player tryout at Total Turf Experience prior to final roster cuts and the 2019 season.