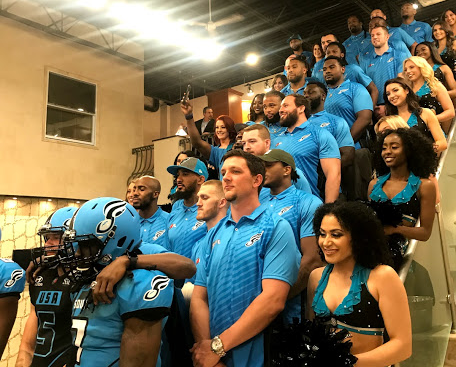 The 2019 Philadelphia Soul revealing their new uniforms with a group picture at the "Meet the Team" event at Colonial Marble on Tuesday, April 23, 2019 (Matt Rappa/SportsTalkPhilly.com).

This afternoon, the three-time Arena Football League champion Philadelphia Soul will kick off its 2019 season opposite league newcomer Atlantic City Blackjacks at the Wells Fargo Center.

The Soul are coming off a disappointing finish to their 2018 season, after winning back-to-back championships in the two seasons prior. They begin their quest for a fourth championship on Saturday — the first time opening the season at home since their first championship season in 2008.

Among a slew of six rookies on the 2019 Soul roster, veterans that played key roles during the team's recent championship run also make up the 24-man set, including quarterback and former league MVP Dan Raudabaugh and wide receiver Darius Reynolds.

Last season's Defensive Back of the Year James Romain, and First Team All-Arena wideout Darius Prince — who recently played in the now-defunct AAF — also have returned. In addition to Prince and Romain (first-team), the Soul have five other returning players who were named to All-Arena teams last season: DE Jake Metz on the first-team, along with WR Aaron Wascha, C Phillip-Keith Manley, OL Neal Tivis, and DB Dwayne Hollis on the second-team. Six defensive players from last season have also returned, including Romain and Hollis.

Raudabaugh said it is the team's "job" and "mission" to win another championship, and that "anything else is unacceptable." “We’ve got the right guys. The right culture is growing here in Philly,” he said.

Things get heated between the Soul and Blackjacks ahead of their scrimmage. They’re ready for the season! pic.twitter.com/KJwT86yakh