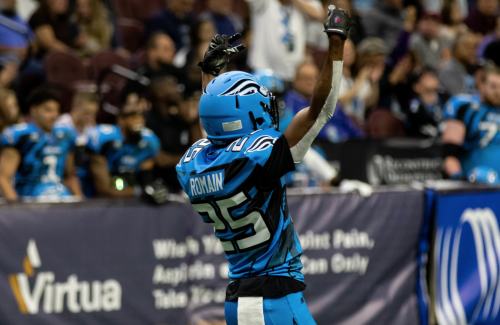 Romain is the third Soul player over the last four years, and third overall, to win the AFL Defensive Player of the Year award, joining DB Tracy Belton (2016) and current GM and assistant head coach Beau Bell (2017). The Soul are among just three teams in AFL history to produce at least three Defensive Player of the Year award winners, joining the San Jose Sabercats (5) and Orlando Predators (4).

This season, the seven-year veteran led the Soul in pass break-ups (12) and the overall league in interceptions (8) — three of which were returned for touchdowns — helping him earn First-Team All-Arena honors for the fourth time over the last five seasons, along with the AFL Defense Back of the Year award for the second straight season. No other player in the AFL this season had more than one pick-six, and no other player in the league's history has as many or more Defense Back of the Year awards as Romain.

In addition to a Soul player winning AFL Defensive Player of the Year in three of the last four years, a Soul player has also been named AFL Defense Back of the Year in four straight seasons — Romain being a part of both feats. The Soul all-time interceptions leader was a key component in helping his team eliminate the reigning champion Washington Valor to advance to ArenaBowl 32; he picked off dual-threat Valor QB Arvell Nelson three times in the first game of the home-and-home series.

Romain and the Soul will compete against the Albany Empire in the ArenaBowl this Sunday in Albany, New York. Prior, he and the rest of the 2019 AFL awards recipients will be recognized at the AFL Award Ceremony on Saturday.