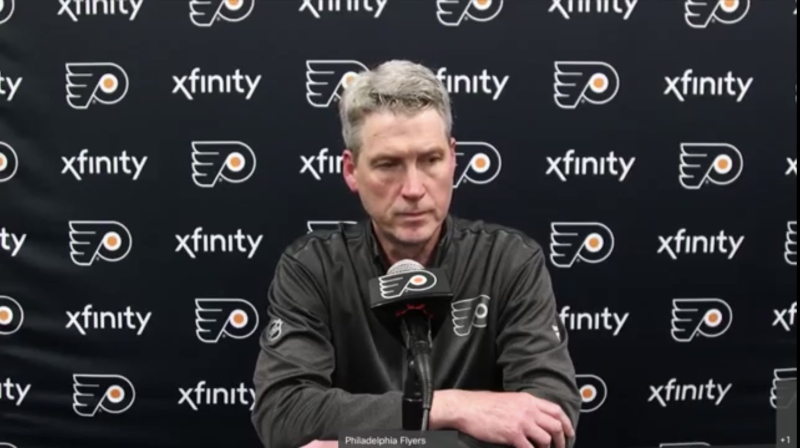 There wasn’t too much unexpected from Chuck Fletcher on Monday as the trade deadline hit. The Flyers sold two pieces that were on expiring deals in Michael Raffl and Erik Gustafsson. They also re-signed Scott Laughton, something they have expressed as a priority over the last week.

It was a little bit of selling and a little bit of positioning the team for the future, two things that need to be the focus moving forward. With the trade deadline now in the past, the focus eventually will shift to the offseason and making changes.

But on deadline day, there weren’t many big splashes to be made unless players were on expiring contracts.

“Based on my conversations in the last few weeks, there wasn’t anything imminent. The vast majority of trades involved players on expiring contracts,” Fletcher said. “I woke up this morning not knowing whether we would trade Scott Laughton or sign him. That was the big decision today and we’re very pleased that we were able to re-sign Scott.”

As much as the offseason will be the time to make moves, the rest of the season remains. Mathematically, the Flyers are still alive in the playoff race, but their chances are slim to none at this point. What this does present is a chance for young players to emerge. By trading Raffl, Fletcher said the Flyers will keep Tanner Laczynski on the active roster. The door is also open for Wade Allison, Cam York and other prospects to make the jump the NHL level and get an opportunity.

“We still have 15 games to play. Right now, we’re still in the fight and at the end of the season we’ll sit down with our group and we’ll have a lot of time to go through,” Fletcher said. “We’ve already been working on some of those issues in the past week. I think it’s a little bit too early to get into what we need to do. We still have to perform our review of the season with our group and I’m sure we’ll have a lot of ideas at the right time, but I think it’s a little premature to talk about that.”

As for Laughton, his five-year deal with an average annual value of $3 million keeps him in Philadelphia at a pretty solid price tag during the prime years of his career. The Flyers did have interest from other teams in acquiring Laughton, but ultimately weren’t going to trade him if they could get a deal done.

“Scott Laughton wanted to be a Flyer,” Fletcher said. “We started working on it prior to the season. At that time, we tabled talks until basically the last week. Both sides worked hard and I give Scott credit. We’ve had a lot of conversations the last few days and were able to come to agreement this morning. Certainly there was a lot of interest in Scott Laughton, but we value him highly. We were happy with the deal, the versatility he brings, the energy. What I found out the last few days kind of confirmed our own opinion of Scott that he’s a very valuable guy and we’re very happy to have him signed.”

Fletcher also confirmed that Laughton will be one of the players the Flyers protect for the expansion draft.

“I think Scott continues to evolve and improve,” Fletcher said. “Obviously, last year he had a particularly strong season. He’s always been in our plans for the future assuming we could re-sign him. That hasn’t really changed any of our plans. The good news we got today is we were able to bring him back.”

Laughton will assuredly be one of the few who knows his place for the following season. There are obvious players that will return like Claude Giroux and Kevin Hayes. There are cornerstone pieces that you build a franchise around like Sean Couturier, Ivan Provorov and Carter Hart that will be back. You can also guarantee that Oskar Lindblom and Joel Farabee back as well.

But the rest, including names like Jake Voracek, James van Riemsdyk and Shayne Gostisbehere, everyone’s status is up in the air, in some cases due to expansion and in others the other popular wheeling and dealing points of the offseason. And Fletcher certainly made that clear. When asked about the status of the coaching staff, the constant scapegoats in seasons like this, Fletcher responded simply with one word. He put some vigor behind it too.

“No,” Fletcher said when asked if changes were coming to the coaching staff.

So that means changes are coming. It will likely happen over what is sure to be a busy offseason. There will be changes with the expansion draft, with the NHL draft and through free agency, but Fletcher’s commitment is putting the Flyers in a better position at this time next season, which is also why he was more conservative now.

“I guess I’m just looking at this a bit longer term. We’re certainly in the fight right now, and we’re going to continue to fight. But we may need some assets over the next few months to address some of the needs that we have going forward, and frankly, that may be a better use of some of those assets,” Fletcher said.

Fletcher also admitted that signing Gustafsson, who was traded to Montreal for a seventh-round pick “clearly didn’t work.”

The Flyers top priority is going to be defensive help, notably a forward who can play alongside Provorov. Matt Niskanen’s departure left a hole for the Flyers, and it’s one that cannot be easily filled.

“That type of player is pretty hard to find,” Fletcher said. “There’s different types of defensemen. There’s puck-moving offensive defensemen, there’s defensive defensemen and there are a few that combine both. We’ll just have to see what the opportunities are in the summer and we’ll also have to continue to see how some of our defensemen play here for the rest of the season.”

For now, the rest of the season will play out, 15 more games over the next month before everything is all said and done in the 2020-21 season. That’s when Fletcher’s real work will begin. In a season where expectations certainly were high and the performance didn’t match that.

“We certainly had much higher expectations for our club than how we’ve played this year,” Fletcher said. “My goal in the offseason is to make this team the best we can make it. We fully expect to be a quality hockey team next year that is in a much different position this time next year.”