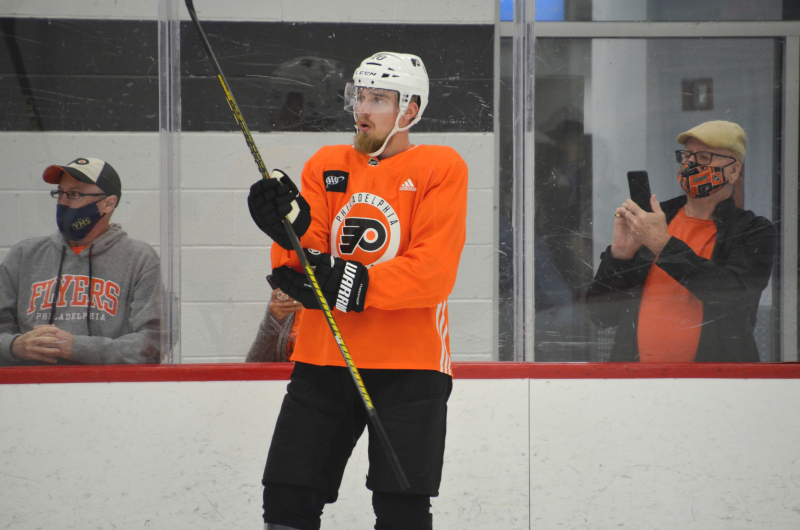 Now it appears that one of the team’s newcomers will also miss at least Friday’s season opener. Rasmus Ristolainen had missed four practices in a row as of Thursday, and Alain Vigneault confirmed that he is out for Friday’s game. He is listed as day-to-day with an upper-body injury. The team called up Nick Seeler to take his place.

With those two players also unavailable, the Flyers called up Max Willman and Jackson Cates. Willman will be in the lineup on Friday and make his NHL debut.

Willman’s story and path to the NHL is rather remarkable. He was drafted in the fifth round of the 2014 NHL Draft at 121st overall by the Buffalo Sabres, but not signed. He attended Brown University for four years, but suffered a torn ACL in his senior season. He returned for a fifth-year season, moving from Brown to Boston University, where he had just six points in 36 games. This was two seasons removed from a junior season at Brown where he scored 11 goals and had 26 points in 31 games.

He signed with the Reading Royals in the ECHL on Sept. 4, 2019, strictly on an ECHL contract. As injuries piled up for both the Flyers and Lehigh Valley Phantoms that season, Willman was given a Professional Tryout with the Phantoms and ran with the opportunity, eventually turning that into an AHL contract. After scoring nine goals and 25 points in 20 games with Reading, he finished out the season in Lehigh Valley, playing in 24 games and scoring three goals and nine points.

He re-signed with the Phantoms last season, playing in 30 games and scoring nine goals and 16 points. That earned him a two-year, two-way contract with the Flyers, signed on March 24 of this year.

Now, Willman’s journey to the NHL comes complete, as he will make his NHL debut just over two years after signing on to join Reading on an ECHL contract.

Vigneault also confirmed that Willman will skate on the fourth line with Nate Thompson and Nicolas Aube-Kubel. Seeler will be paired with Keith Yandle. Justin Braun will fill Ristolainen’s place alongside Travis Sanheim.

Ryan Ellis, who also missed three straight practices following the final preseason game, was back on the ice on Thursday and is good to go for Friday’s opener.

As expected, Carter Hart will be in goal for the season opener as well.

The Flyers hit the ice for the first time on Friday night, taking on the Vancouver Canucks at 7 p.m.