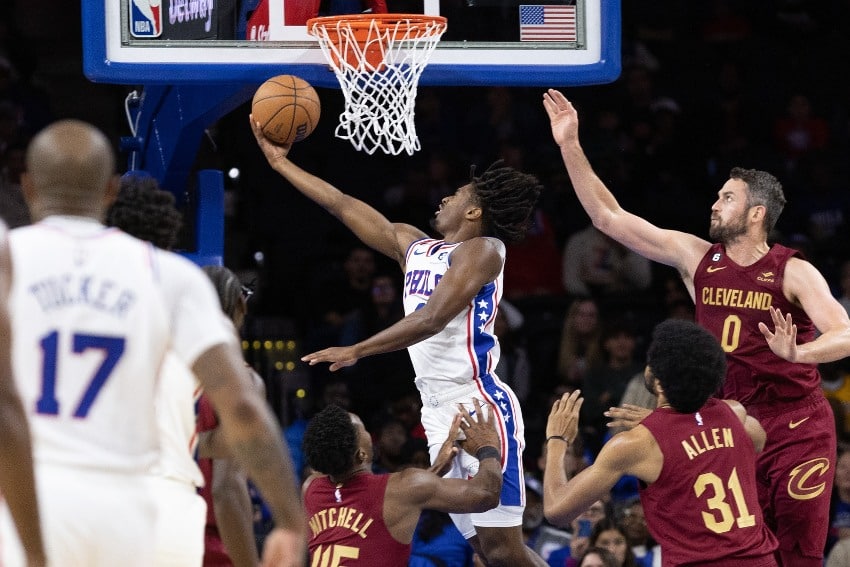 The Philadelphia 76ers moved to 2-0 this preseason after defeating the Cleveland Cavaliers 113-112 on Wednesday at the Wells Fargo Center.

The Sixers full starting lineup stepped onto the floor together for the first time in live game action. Tyrese Maxey continued his hot shooting from the preseason opener, finishing with 21 points on 9-of-11 shooting from the field. Joel Embiid added 12 points, six rebounds and three assists. James Harden finished with nine points and five assists. It was announced pregame that head coach Doc Rivers was sitting out with an illness. Assistant coach Dave Joerger filled in as the head coach.

Donovan Mitchell, making his preseason debut for the Cavaliers, led the way for them, scoring 16 points on 6-of-9 shooting.

The Sixers continue their four-game preseason slate with another matchup against the Cavaliers on Monday in Cleveland. Here are three observations from the win.

For the second consecutive preseason game, Maxey dominated the game with his scoring ability. Just one year ago, he was a hesitant shooter. Now, he pulls the trigger with confidence regardless of where he is on the court. He scored 21 points despite playing in just 15 minutes against Cleveland.

In his first two halves of preseason basketball this season, Maxey totaled an impressive 41 points on 15-of-19 shooting (78.9%). The amount of improvement seen from the 21-year-old, who is heading into his third season, is incredible. It might be safe to elevate Maxey into being the team’s second scoring option because he is just that good.

In addition to Maxey’s strong performance, Tobias Harris played an efficient brand of basketball. He scored nine points on 4-of-5 shooting to go with three rebounds, two assists, two steals and a block in 17 minutes. He will not be one of the team’s top scoring options on most nights, so it is important for him to impact the game in multiple areas.

The rest of the Sixers’ starters went through some ups and downs in their first live game action together. The offense looked stagnant at times, which is to be expected as they iron things out throughout practices and their remaining preseason games. Embiid, after shaking off some rust, gradually regained his touch in addition to making a few good moves around the basket. Harden while only shooting 3-of-9 from the field, found a solid mixture of both looking to score and facilitating for others. He looked like he had some of his typical explosiveness and shiftiness, dropping Dean Wade on this play late in the first half.

A couple of the Sixers’ key offseason additions made their mark against the Cavaliers. P.J. Tucker stepped onto the floor for the first time in a Sixers uniform and made some impressive plays. This segment from the second quarter showcased one of the ways he can impact the game: Hustle and offensive rebounding.

Tucker averaged 1.4 offensive rebounds per game last season. In addition to the hustle plays he creates, he also plays with a veteran presence. There were multiple plays where he set an off-ball screen that freed up an open shot for a teammate. It would not be shocking if these types of hustle plays help the Sixers win a few games this season.

De’Anthony Melton, another one of the team’s key offseason moves, continued to showcase his versatility and two-way presence. He got off to a rough start shooting before picking it up and finishing with 11 points on 3-of-7 shooting. While he can impact the game as a scorer, he is more known for his defensive abilities.

Melton has the savvy and instincts needed to anticipate passes and be a major disruption defensively. He finished the night with 11 points, four rebounds, three assists, one steal and one block.

Paul Reed, who started at center for Embiid in the Sixers’ preseason opener, received the first crack at the backup center minutes against Cleveland. He impressed, playing with his usual energy and wreaking havoc both defensively and on the offensive glass. There was a stretch where he grabbed an offensive rebound and made the put-back layup on offense. On the other end of the floor, he was switched onto Donovan Mitchell and effectively forced a miss on a Mitchell drive to the basket. Through two preseason games, he has done a good job showcasing his versatility while also playing his usual chaotic style of basketball. He finished with five points, six rebounds and four steals in 17 minutes.

Montrezl Harrell, the other half of the likely Sixers’ backup center tandem, did not hit the floor until the second half. However, he wound up making a huge imprint on the game. He finished with 13 points, including knocking down the game-winner in the final minute of action, to go with three rebounds and two assists. Playing against mostly bench players in the second half of a preseason game, he was still seen trash talking multiple Cavaliers players. His energy, attitude and production on the floor all point toward him becoming a fan favorite in Philadelphia.

With the usual starters only playing in the first half, there were a few other notable bench performances. Shake Milton impressed, filling up the stat sheet while spending much of the second half running the offense. He finished with 12 points, four rebounds, four assists, two steals and one block in 26 minutes.

Danuel House Jr., who missed Monday’s preseason opener with neck stiffness, made his first appearance in a Sixers uniform. He knocked down his lone attempt from 3-point range while also grabbing four rebounds in 10 minutes on the floor. He appeared ahead of Matisse Thybulle in the rotation. However, that could have been because the team wanted to see him get work on the floor since he missed the preseason opener.

Some notable absences against the Cavaliers, potentially because the team already knows their roster status, were Isaiah Joe, Charles Bassey and Trevelin Queen. All three of these players are potentially on the roster bubble, making their absence notable. The team has to trim down the roster, currently at 17 players, to 15 before the start of the regular season.