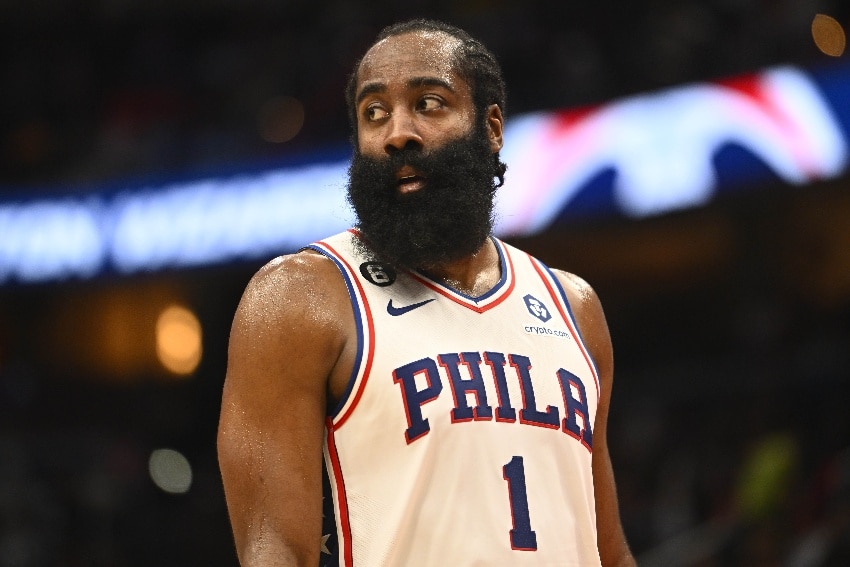 The Philadelphia 76ers received some unfortunate news on Thursday afternoon. According to Adrian Wojnarowski of ESPN, James Harden suffered a right foot tendon strain and is expected to miss a month of action.

Harden suffered the injury in Wednesday’s 121-111 loss to the Washington Wizards. The injury possibly occurred on a layup attempt in the third quarter. He hit the floor after the layup attempt and rose with a limp before heading into the locker room.

Harden eventually returned to the game with 7:15 remaining in the fourth quarter. According to NBC Sports Philadelphia’s Noah Levick, Harden had a noticeable limp in the locker room after the game and refused to speak to reporters.

The 33-year-old is expected to miss a month of action. If he returns on that timeline, he will end up missing 14 games. The injury could not have come at a worse time for the Sixers. The team is entering a grueling part of their schedule, with games against the Phoenix Suns, Atlanta Hawks (three times), Milwaukee Bucks, Minnesota Timberwolves, Brooklyn Nets, Cleveland Cavaliers and Memphis Grizzlies all coming within the 14 games Harden is set to miss. In addition, the Sixers need all the time they can get to continue to gel together. The team is off to a 4-5 start, but they had won four of their past six games.

While the early reports say Harden is expected to miss a month, the team did announce shortly after the news broke that he will be reevaluated in two weeks.

How will the Sixers be able to replace Harden’s production?

Harden has been off to a great start to the season. The biggest question about the Sixers heading into the season was what Harden was going to look like. Through the first nine games, he is averaging 22 points, seven rebounds and 10 assists per game. This injury is unfortunate as it looked like Harden was back to the dominant, game-changing level he was at a few years ago.

Replacing the production from a star player is always going to require a team effort. However, Tyrese Maxey is likely going to be the player relied on the most to pick up a lot of Harden’s production. The 21-year-old has already increased his level of play from last season. He is averaging 24.2 points on 51.6% shooting from the field and 46.8% from beyond the arc. He has shown the ability to further pick up his game when the team is without one of its star players. In the three games Joel Embiid has missed this season, he has averaged 34.7 points per game while shooting 61.3% from the field and 59.3% from beyond the arc.

Maxey’s continued ascent will go a long way towards helping the Sixers navigate Harden’s injury. However, the team will need consistent strong performances from Embiid as well. His responsibilities mostly remain the same – to be a dominant presence on both ends of the floor. He got off to a cold start the first two games of the season before rebounding back to his typical MVP-level performance. His scoring is currently down a touch from the prior two seasons. However, he is shooting a career-high 53.2% from the field. The Sixers will definitely look to run the offense out of both Embiid’s and Maxey’s hands, with the pick-and-roll between the two expected to be a big part of the offense.

The area they likely will have more difficulty replacing is Harden’s playmaking. Harden is currently second in the league in assists per game (10). He has done an excellent job running the offense so far this season. The Sixers do not have someone else on the roster who even comes close to matching his playmaking ability. Maxey (3.4) and Embiid (3.3) are the only other players on the roster who are averaging above three assists per game. De’Anthony Melton also has some ball handling ability and can do a solid job running the offense on occasion. Shake Milton has not played much so far this season. However, he will likely receive some consistent minutes as the team looks to replace Harden’s minutes on the floor.

The team is without a doubt worse off with Harden out of the lineup. However, they likely have the depth and talent to be able to withstand the loss in the short-term.