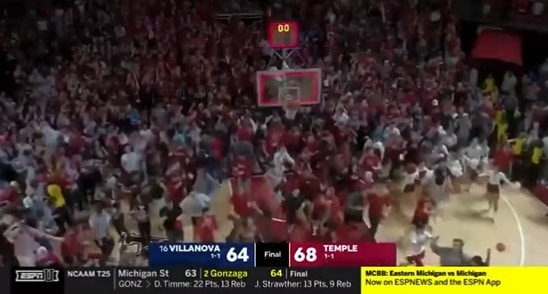 Philadelphia: There are certain cities that are very passionate about College basketball & the City of Philadelphia is one of them & we had a Big 5 Battle on Friday night as the Temple Owls took on number 16 Villanova Wildcats from the Liacouras Center on the campus of Temple University. Villanova enters the game 1-0 off a win over LaSalle while Temple comes into battle with Villanova off an embarrassing loss to Wagner.

The Owls came out throwing big shots early on as they would have a 26-13 lead with 6:28 left in the first half.

The Wildcats would respond by cutting the lead down to 5 at 34-29 on a jumper from Eric Dixon and that would be the halftime score. Damian Dunn had 10 points in the first half for the Owls.

The 2nd half would be something like the first half as the Owls would come out swinging and get the lead up to 8 at 45-37 with 13:43 left. The Wildcats countered as they took their first lead of the game on foul shots from Caleb Daniels which made it 47-45 with 10:41 left. For the rest of the game, it would be a defense as no one had a lead of more than 2.

Huge 3 for #Villanova & lead 64-62 over #Temple with under a minute left in 2nd half pic.twitter.com/K2fX5kdKwB

The Owls came down and retook the lead on a foul with 1.1 left Damian Dunn would make huge foul shots and Temple would do something that they have not done since 2012 which was defeat Villanova and the fans stormed the floor

Following the game, Temple Coach Aaron Mckie would explain the win over Villanova

So what is next for both teams, Temple will now look to build off the win as they do battle with Vanderbilt on November 15 at 7 PM from Liacouras Center on ESPN+ while Villanova will try to find out what went wrong and get back to their winning ways with a game against Delaware State on November 14 at 6:30 PM on FS2 from Finneran Pavilion.