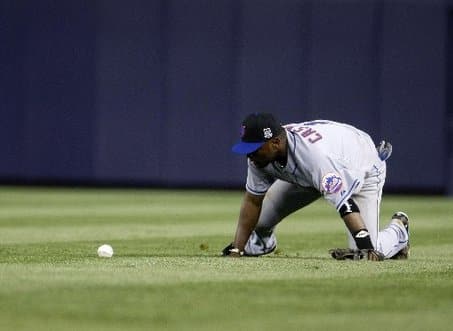 When the Phillies announced the signing of former Mets 2B Luis Castillo to a minor league contract, there were immediate concerns about his character. The classy veteran managed to silence those critics today, before he even donned a Phillies uniform for the first time.

In a move destined to go down in the annals of the Phillies' storied history, Castillo made a display of respect for his fellow 2B competitors, by permitting them an additional day of repetitions. Castillo's classy gesture was not lost on the Phillies' leadership core. Chase Utley, speaking from his second base lawn chair, praised Castillo effusively. Utley indicated that his fellow second-sacker "showed a lot by giving up a day (of competition)", and expressed confidence that Castillo would have "almost as much range as I do from my chair."

General Manager Ruben Amaro, Jr. was similarly impressed. "He (Castillo) wanted to give them (2B competitors Josh Barfield, Delwyn Young, and Pete Orr) another day, to show respect for the time they had already put in this Spring. Castillo displayed respect for the game, and confidence in his own ability, That what we are looking for from our veterans." Amaro indicated that the Phillies "would continue to investigate opportunities to upgrade the roster."

Barfield and Young were unavailable for comment, as they were combing Craigslist for apartments in the Lehigh Valley area. It is believed that Pete Orr has already made arrangements for lodging in the area.

Castillo will undergo a physical on Wednesday morning, and is expected to be in the lineup that afternoon. Reports that Castillo was traveling to Clearwater with recently-DFA'd hurler Odalis Perez have not yet been substantiated.