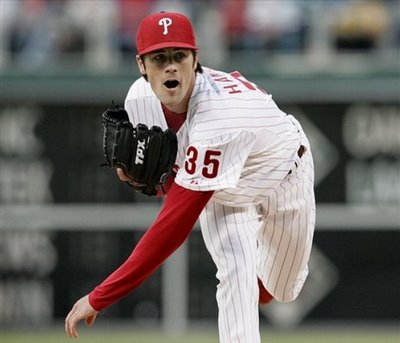 Cole Hamels (4-2, 3.19 ERA) dazzled  through the first six innings before allowing a run to score in the seventh (an RBI double off of the bat of Todd Helton). He struck out seven and walked one, giving up two hits. After eight innings pitched, he was finished with a grand total of eight strikeouts. He only allowed one run on five hits in his outing…I don't know if this is too much to ask for, I really don't think it is, but can the Phillies please give him some run support?

The Phillies finally scored a run, the first of the night, in the fifth inning. Wilson Valdez singled to left to score Raul Ibanez from third.

After the game was tied up in the seventh thanks to the "Toddfather" as his fans call him, the Phils struck again in the eighth inning, this time it was Jimmy Rollins hitting a sacrifice fly to right field, scoring Wilson Valdez from third. 2-1 Phillies, and in came Ryan Madson.

Also in the eighth inning, Shane Victorino came in to pinch hit for Cole Hamels and successfully layed down a sacrifice bunt. After the game, Matt Gelb of the Philadelphia Inquirer reported that Shane will have an MRI done tomorrow on his right hamstring, and if a trip to the disabled list is necessary, it can't be retroactive to Sunday. Shane said he felt fine after pinch hitting.

After allowing a lead off double to pinch hitter Seth Smith, Ryan struck out the next two batters on his 4-seam fastball which reached 97 m.p.h and changeup which was between 84-86 m.p.h. He walked the next batter but struck out Jason Giambi, grey beard and all, to end the game. Madson got the save, his seventh of the season, and Cole won his fifth start of the season.

The Phillies snapped their four-game losing streak and will go for the two-game series sweep tomorrow night with Joe Blanton (1-2, 5.50 ERA) on the mound against Jhoulys Chacin (4-2, 2.89 ERA).

Update on Jose Contreras: (Reported by the Threshers on Twitter) Appeared in the Clearwater Threshers game in the first inning and allowed three runs on four hits. Reached his pitch limit before getting out of the inning. Threw 21, 13 for strikes.