Kyle Kendrick Holds Down The Fort In 3-0 Victory 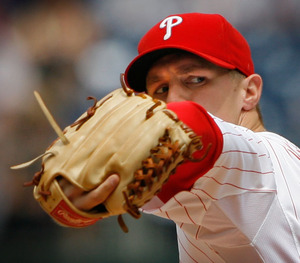 Yeah, that Kyle Kendrick. Believe it or not, Kyle pitched five shutout innings for the Phillies in a game that would have been started by Roy Oswalt, but he's on the disabled list with a sore back. It's safe to say that everyone expected Kyle to have a rough night, even the Phanatic who was seen praying before the game, but Kyle had other plans for this game.

The Phillies scored first in the second inning, thanks to Pete Orr who grounded into a fielder's choice to second base, scoring Ben Francisco from third.

Ryan Howard launched a solo home run into the Phillies' bullpen (seventh of the season) to give the Phillies a 2-0 lead in the fourth.

After five innings, Kyle's line was a suprising: Two hits, three strikeouts, and one walk. Where has this Kyle been in extra innings this season?

Shane Victorino came up big in the fifth with an RBI triple off of the right field wall which scored Jimmy Rollins. Shane's defense tonight was also incredible, but we expect nothing short of that!

Romero came in for the sixth inning against right-handed batters…why, Charlie, why? He allowed one hit and walked one, but made it out alive, maintaining the shutout.

It's Ryan Madson, of course he closed it out beautifully. The Phillies shut out the Braves and improve to 22-10 for the season. Rubber match tomorrow!