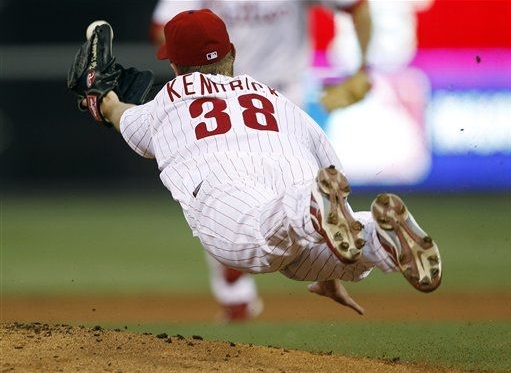 Pablo Sandoval destroyed a changeup from Kendrick to give the Giants a 1-0 lead in the second inning. In the fourth, Nate Schierholtz singled to score Aubrey Huff. Three innings later, Aaron Rowand reached on a throwing error by Michael Martinez which scored two. 4-0 Giants.

Kyle Kendrick pitched arguably well being, you know, Kyle Kendrick. He allowed three earned runs on six hits, striking out four and walking two in 6 and 1/3. Juan Perez and Brad Lidge finished off the inning for Kyle, with 0's across their lines.

However, Tim Lincecum out-pitched Kyle tonight allowing zero earned runs on three hits, striking out six and walking four in six innings. The only run scored tonight for the Phils came in the seventh on Chase Utley's RBI double. They were 1-10 tonight with runners in scoring position.

It took 46 games for the Phillies to lose back-to-back, which happened tonight. The Pirates will visit for the weekend starting tomorrow with Halladay vs. Charlie Morton.