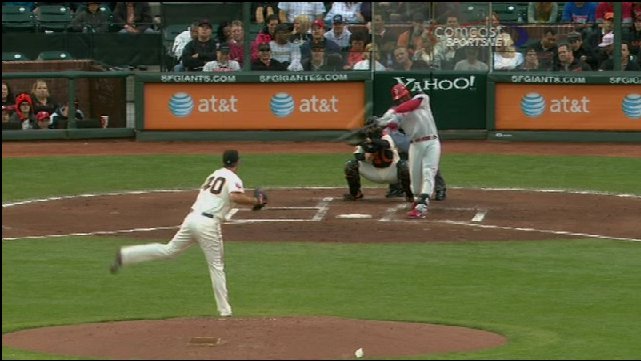 Wow, what a quick game this was at AT&T Park in San Fran. We can thank Cliff Lee for that, who pitched a beautiful game and was backed up by some early home runs by the Phils.

The first run of the game scored on Hunter Pence's first home run as a Phillie, and it was a BULLET to left field. After that, John Mayberry homered to go back-to-back. 2-0 Phillies in the second.

As for the Giants: Zilch. Cliff Lee absolutely shut them down. Madison Bumgarner shut the Phillies down after the first two innings, but Cliff Lee won this battle.

Shane Victorino scored from second on Hunter Pence's (hey, I like this guy) single up the middle in the ninth inning. The Giants still hadn't scored a run. Heh.

So, another complete game shutout for Cliff Lee which puts him at 11 wins on the season. The man can't be tamed.

Vance Worley against Johnathan Sanchez and the Giants tomorrow night. To refresh your memory, Vance Worley's first big league complete game came against the Giants in his last outing. Let's do it again, Vancey pants.