Rare Occurrences: A Loss, and a Rough Outing from Hamels 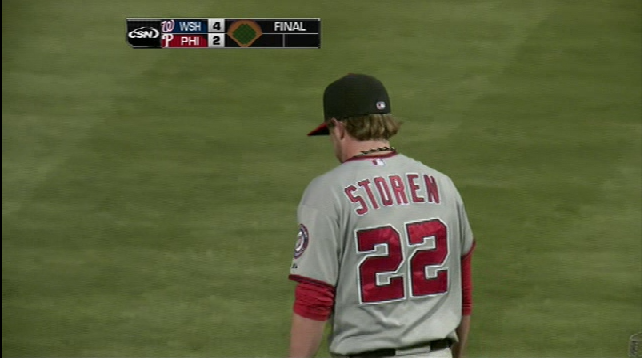 To put it simply, Cole Hamels just didn't have it tonight, and the Nationals took advantage of that. His struggles started early, walking two in the first inning, but striking out Jayson Werth with two outs and a man on third. Disaster number one averted.

In the second inning, Wilson Ramos singled and Laynce Nix walked to get on for Livan Hernandez who singled to score Ramos. Rick Ankiel singled to score Nix to give the Nats a 2-0 lead. The Phillies scored one in the inning; Ryan Howard scored from third on Wilson Valdez's single.

Cole Hamels was beat up a bit in the fifth, allowing Rick Ankiel to score on Werth's RBI groundout with the bases loaded. Luckily, only one run would score in the inning. Disaster number two averted.

After five, Cole was done. He allowed three earned runs on six hits, walking four and striking out five. Not good, but not terrible. Kyle Kendrick replaced him in the sixth.

A run would score for the Nats on another RBI single from Livan Hernandez. Following that, Kyle Kendrick pitched a scoreless seventh and a scoreless eighth. The Phillies still hadn't scored more than one run as Livan was pitching a rather good game.

Brad Lidge pitched a 1-2-3 ninth inning striking out one. In the bottom of the inning, Shane Victorino legged out an infield single before Utley sent him to third on a single which went under the glove of Nix. Drew Storen struck out Howard, and got Pence to pop-up, which sent Shane home cutting the Nats' lead down to two runs. However, they went on to win 4-2 after Ibanez popped-up to end the game.

The Nationals take game one of the series. Roy Oswalt will start tomorrow for the Phils against John Lannan at 7:05. Also, Philliedelphia would like to congratulate John Kruk for being inducted into the Phillies' Wall of Fame out in center field tonight. Congrats, Krukker!