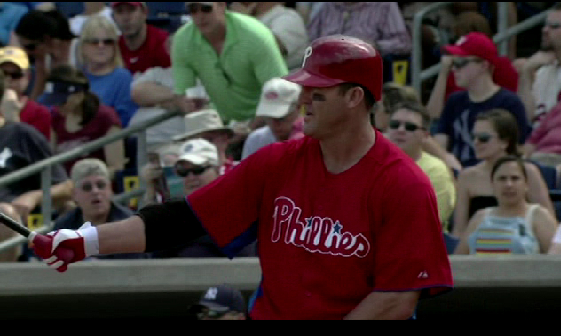 The Detroit Tigers payed visit to the Phillies in Clearwater this afternoon while the split squad team headed to Tampa to face the Yankees.

In Clearwater, Cliff Lee pitched a shaky three innings allowing two earned runs on six hits, the runs were given up to Ryan Rayburn who scored Ramon Santiago on a two-run homer in the first inning.

In the third inning, Freddy Galvis scored Pete Orr on a sacrifice fly, putting the Phillies up on the board.

Lee Thomas scored Andy Dirks in the fourth inning on a misplayed ball by Rollins followed by a fielders choice which got Don Kelly out at second. In the same inning, John Mayberry Jr. scored Hunter Pence on an RBI groundout.

Ryan Rayburn struck again in the fifth inning scoring Santiago on an RBI single. With a 4-2 lead, Jim Thome shortened it by one run by scoring Rollins on a single.

The Phils tied it up in the sixth inning thanks to Freddy Galvis who scored Laynce Nix (who absolutely trucked Bryan Holaday at the plate) on an RBI single.

Domonic Brown made his first appearance in a game since injuring his hand last week. He popped out in the seventh inning.

Jake Diekman tossed a 1-2-3 eighth inning, the quickest inning of the game. J.C Ramirez also pitched a speedy scoreless inning back in the seventh.

Jiwan James came up with the big club this afternoon and had his first at bat of the game in the ninth inning with two men on and two outs. Unfortunately, he struck out, ending the inning. It was still really cool to see a single-A player play with the big club, especially such a popular guy among the players on Twitter.

Meanwhile in Tampa, the Phillies' split squad team dropped a game to the Yanks, 3-0. The only scoring plays came in the fourth and seventh. Russell Martin and Andruw Jones scored on an RBI single from Chris Dickerson, and Justin Maxwell scored on a fielding error by third baseman Hector Luna. There's your ballgame!

Neither the Tigers or Phillies could score in the tenth inning, resulting in the first tie of the spring, 4-4. Tomorrow's game will be at 1:05 in Bradenton against the Pirates.