Fixing The Phillies? Not Yet. 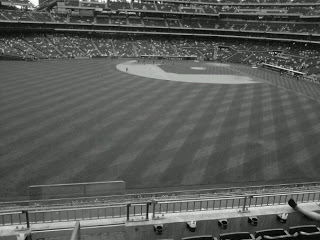 The Phillies are off to a 7-9 start. To hear some tell it, they might as well be 2-14. They are on the panic button, and want drastic action taken now. I'm not with them. I think a harder road might be a better road than winning 102 games like last year, which incidentally didn't end in a parade. I also subscribe to the old "100 At-Bat" Rule: You know nothing about the kind of season a guy might have until they take 100 AB's. Not one Phillie has crossed 65 at-bats yet, so i'm not ready to judge. Besides, they're on a 3-4 West Coast trip, not 1-6.

With that said, let's not mince our words. The Phillies just lost two straight to the lowly Padres, and didn't hit at all this past week. They've already lost series to the Pirates, Mets, Giants, and Padres, of which only one is considered a serious contender. No Phillie has ten RBI's, and none have three homers either. Cliff Lee's on the DL. Polanco and Thome look cooked, and Mayberry's making last year look like a fluke. Nix still doesn't fit on this team. Howard and Utley still don't have return dates. Hunter Pence is hitting .258, Jimmy Rollins is at .254, and those aren't even the bad ones: Polanco's at .192. Juan Pierre leads the team in hitting. I have four main problems with this team.

Now, I'm not advocating the Phillies do anything today, or even this week. I'm saying that if we're looking at this situation in a few weeks, you can't let it continue. So what to do? What are the options? Well, I have a few in mind.

Now, other than the line-up change, I'd do nothing today. Some of this stuff would send shockwaves through the team and the fan base, and you don't just do that because you don't like how a couple of days in California went. With all of that said, if a month from now, we're right back here, then it's time for some major changes.
Topics
Uncategorized