Phillies Even Series with 7-1 Win; Offense Finally Breaks Through 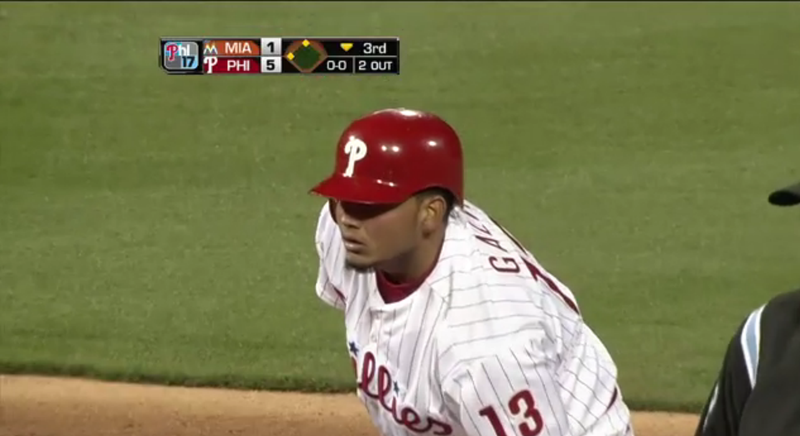 Not tonight, Miami. Freddy Galvis and the Phils had other plans.

Tonight was all about this Phillies lineup. Charlie Manuel sent out his fifth different lineup, and he finally struck gold. And by gold, I mean runs. With Roy Halladay on the mound against fellow ace Josh Johnson, Doc would reign superior once again with a healthy, hitting group of guys behind him.

Before the offensive surge from the home team, the Marlins sent a run home in the top of the second thanks to an RBI groundout from Johnson. Doc wasn't hitting the zone in the first two innings, and his pitch count reached close to 50 by the fourth inning.

The bottom of the third inning is where this game takes an unexpected turn. After Doc grounded out, well, I'll make a list of what went down.

That was fun, huh? It was the first time this year the Phillies have really beat up a pitcher and came through with more than two runs in an inning. Doc finally settled down an tossed a 1-2-3 inning in the fourth.

In the bottom of the fourth, Shane Victorino smacked an RBI single to left field to score Jimmy Rollins, making it a 6-1 game. After that, Josh Johnson's night was complete. He allowed 11 hits in 3 2/3 innings. Not good.

With Ryan Webb on the mound for Miami, Carlos Ruiz sent a baseball to the left field stands over the head of Logan Morrison. 7-1 Phillies.

After seven very strong innings, Roy Halladay handed the ball over to Chad Qualls. Doc allowed just one run on five hits, walking one and striking out three. He'll pick up his second win of the season.

Michael Stutes came in for the ninth inning and pitched it perfectly securing the 7-1 lead. Phillies win their Opening Night game and even the series with Miami. Joe Blanton will take the mound tomorrow for the first time this season at 7:05!