Right on the Niese: Jon Niese and Mets Blank Phillies 5-0 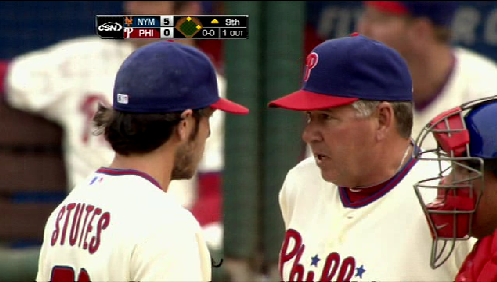 Ugly, ugly, ugly. No, not the Mets. The Phillies' offense and pitching. Vance Worley started his second game of the season this evening against Jonathon Niese and the Mets in this three-game series. After last night's loss, the Phillies were looking to turn it around and come back to .500 tonight.

Third baseman David Wright came back from his pinky injury which isn't that serious, apparently. He hit a solo home run on the first pitch he saw in the first inning, giving the Mets an early 1-0 lead.

Vance Worley settled into this game in the top of the third, striking out Josh Thole, Jon Niese, and Ruben Tejada, two swinging, one looking.

However, it wouldn't be smooth sailing from there. The Mets loaded the bases in the fourth inning with a walk and two singles. Jason Bay hit into a 6-4-3 double play which scored Daniel Murphy from third. Lucas Duda proceded to send a ball over the wall in right-center, scoring two. Just like that, the Mets had themselves a 4-0 lead.

Vance was having a difficult time finding the zone which lead Rich Dubee to make two trips to the mound in two innings. Despite perspiring all over the mound, Vance battled through and made it through six innings. His final line: 8 H, 4 ER, 4 BB, 5 K, 2 HR.

Michael Stutes wouldn't be so lucky. In the top of the ninth, he walked Mike Baxter who then stole second and score on a single from Ruben Tejada. 5-0 Mets.

Well, the Phillies were shut out by the Mets and have lowered their record to 3-5. It's not looking good right now, but let's not jump to conclusion in mid-April.

Tomorrow is Jackie Robinson Day in major league baseball! Mike Pelfrey and Cole Hamels will square off tomorrow at 1:35. Hopefully the offense will show up and the Phils can avoid being swept by the Mets at home.