Why You Can’t Panic, Or Dismiss, The Phillies Start 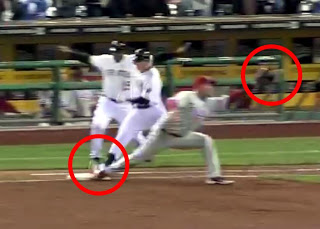 Here's the good thing: who cares. The 2010 Phillies, who had baseball's best record, were about .500 at the All-Star break. The 2011 World Champion Cardinals, and AL Wild Card winning Rays started September over ten games back of the playoffs and out of it. The Pirates lead the NL Central last year at the trade deadline.

And all of this is my point. In today's MLB, with five playoff spots per league, you don't have to put a great team on the field all year. You have to get to the trade deadline a .500 team and then be hot at the finish, period, to win. Last year's wire to wire NL East win didn't get a parade down Broad, but 2008's low 90's winner who duked it out to the end of the season did. This team's best strength, it's starting pitching, has been as good as advertised. As long as that's the case, they'll win lots. In the playoffs, strengths win the games (see last year's Cardinals' offense). Weaknesses just can't get in the way.

Which is why you should be concerned. These games aren't exhibition, they count. The offense has stunk. The lack of a set order has left Pence basically without defense behind him. Charlie sent Mayberry up instead of Nix against the Pirates closer on Sunday, who's righty, and wasn't leaving the game. Charlie's also been weird with bunts. Basically, the decision making is questionable, the execution stinks, and they're getting little from left and second, two major question spots. This team misses Howard and Utley badly. Those guys might not be themselves either, making it worse. For those thinking Dom Brown can be helpful, and I think (and hope) you're right, he's off to a slow start. Simply put, Charlie and his offense have an issue.

So take this weekend both ways. Meaningless? Sure. Not worth worrying over? Yeah right. Just don't message me after the Marlins series telling me it's time to trade the house for some batter on the rocks with his team. It's a long, long season, and this mediocre offense should hold up in the race for a long while.