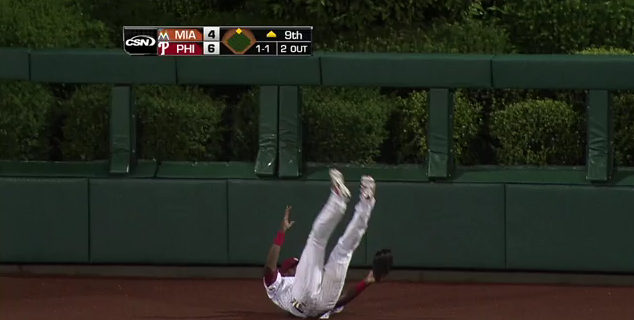 Coming off of his first complete game shutout of his career, Kyle Kendrick took the hill tonight in the first game of this three-game series at home against the Miami Marlins. Mark Buehrle took his second loss of the season against the Phils on April 12, but has won his last five starts.

Giancarlo Stanton is coming off of a fantastic month of May which he drove in 30 runs and smashed 12 homers. He would drive home a run on a double to deep left-center, putting the Fish on the board.

The Phils got the ball rollin' in the bottom of the first with three straight singles from Placido Polanco, Hunter Pence, and Carlos Ruiz. With two outs, Hector Luna delivered a two-run single to left field, putting his team up 2-1. And Luna would drive in yet another run in the seventh off Chad Gaudin.

Kendrick had the bases loaded behind him in the top of the third, but got first baseman Logan Morrison to ground into a 3-6-1 double play to end the inning.

The game was delayed by rain for 48 minutes in the top of the fifth inning.

Hunter Pence gave the Phillies a 4-1 lead with a two run bomb in the bottom of the fifth.

The Phillies said Contreras left the game because of soreness in his right elbow, but it certainly looked much worse than that as he threw his final pitch and dropped to the turf between the mound and infield. Contreras could be the 11th Phillie to hit the disabled list this season.  Bastardo relieved him after he left.

After allowing back to back homeruns and a walk from Bastardo, Charlie Manuel finally did something fans awaited to see for a long time. He brough in his closer Papelbon, who retired Inftante on a weak infield pop up and whiffed Hanley Ramirez. Ramirez was lucky he did not get ejected after throwing his helmet on the ground.

Kyle Kendrick (2-4) allowed eight hits in 5 1-3 innings, but held Miami to two runs, while walking three and striking out four.

Mark Buehrle (5-5) allowed a season-high 11 hits in only five innings of work, while striking out two. Apparently, two of Buehrle’s five defeats this season have come in at Citizen Bank Park.

Carlos Ruiz, Placido Polanco and Hunter Pence each had three hits, meanwhile the hot Miami Marlins had 13 hits and left 12 runners on base.

Papelbon pitched the ninth for his 15th save, but needed a awesomeness catch in center by John Mayberry Jr. on a deep drive by Greg Dobbs to preserve it.

Cole Hamels takes the mound tomorrow as he looks for win #9 of the season against the Marlins at 405pm.