Phillies try to turn things around against Twins 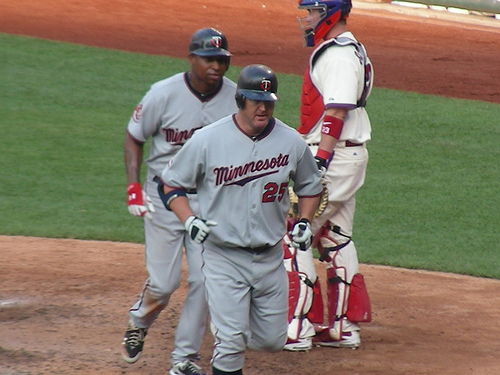 Jim Thome homered as a member of the Twins in the two teams' last meeting in June 2010. (Courtesy of SportsChatPlace.com)

It's not often this season that you can look at the standings and find a team that the Phillies are supposed to beat. But if there ever was a team, it's the Minnesota Twins.

The Phillies have spent the past three weeks facing teams with winning records only to see their margin for error grow and grow to an 8 1/2 game deficit in the division. There is no room for error anymore, and perhaps worse, the Phillies can't just help themselves. They need help from other teams.

But first, they need to help themselves by winning, a task easier said than done for a team that is 2-8 in the month of June.

But the Twins come in with a rough record of their own, just 24-35 and in last place in the AL Central.  Here's the most important difference between the two teams. The Phillies record in June is 2-8. The Twins record in June is 7-3. The Twins are actually one of baseball's hottest teams at the moment.

That may be primarily due to the return of Justin Morneau. Morneau is among the team leaders in home runs and RBIs despite missing part of the year with an injury. He also sports a healthy .346 wOBA (weighted on-base average).

There aren't many names you'll recognize on this team. Sure, there are two former MVPs in Morneau and Joe Mauer, who is hitting .302 and has 27 RBIs plus .333 BABIP (batting average on balls in play) and .828 OPS (on-base percentage plus slugging percentage). Another key to Mauer's game is that he doesn't hit many fly balls. Just 19.5 percent of the time he makes contact it is a fly ball.

Other players making a name for themselves early in their career like Danny Valencia and Alexei Casilla are struggling this year. Valencia was even sent down to Triple-A at one point this season.

But the offensive star has been Josh Willingham. Not only does he lead the team with 11 home runs and 41 RBIs, but he has a whopping .417 wOBA. His OPS is .968, also very good.

In the opener, Kyle Kendrick (2-5, 4.44 ERA) goes against Nick Blackburn (2-4, 7.75 ERA) – Kendrick took the loss in his last start Wednesday against the Dodgers, going 5 2/3 innings allowing five runs. It snapped a two-game winning streak for Kendrick. Kendrick has never faced the Twins.

Blackburn won his last game against the Royals allowing two runs over five innings. It matched his lowest runs allowed total this season. He hasn't lost a game since May 6. In one career start against the Phillies, Blackburn allowed eight runs over 1 2/3 innings.

In the middle game, Cole Hamels (8-3, 2.93 ERA) faces P.J. Walters (2-1, 4.42 ERA) – Hamels surrendered a 3-0 lead in his last start to suffer the loss against the Dodgers. Since starting the season 8-1, Hamels has lost each of his last two starts. In one career start against the Twins, Hamels allowed four runs (three earned) over seven innings and took a no-decision.

Walters allowed five runs in five innings to the Cubs in his last start, taking a no-decision. This is Walters first appearance against the Phillies.

In the finale, Joe Blanton (5-6, 5.40 ERA) gets the start against Scott Diamond (5-1, 1.61 ERA) – Blanton managed to help the Phillies snap their six-game losing streak in his last start, winning despite allowing five runs in 6 2/3 innings to the Orioles. Despite having five wins, Blanton has won only one of his last five starts, allowing at least five runs in each. In his career against the Twins (eight starts), Blanton is 4-4 with a 4.45 ERA.

Diamond pitched six shutout innings against the Cubs in his last start to earn his fifth win of the season. Diamond has allowed no earned runs in four of his seven starts. This is his first appearance against the Phillies.

This is a series that is just what the doctor ordered for the struggling Phillies. Don't get me wrong, the Twins can play tough, and none of these games will be easy. But this is a series that the Phillies must have. And if they want to prove that they are still alive in any race this season, they best get on the right track now with a series win.

The Phillies are sending out one of their aces and two pitchers who probably would fit into the Twins rotation higher than their opposition. This series screams for the Phillies to win it.

The key to the whole series is the Phillies ability against unknown pitchers. The Phillies have made their identity slightly known by being a team that needs to get things done early. If the game doesn't appear to be in the Phillies hands by the seventh inning, any of these games is in jeopardy of going the other way.

So for now, the Phillies simply need to win games. They can make a good start of that with a good series against the Twins.