Kendrick Dazzles Once Again in 4-2 Triumph Over Nationals 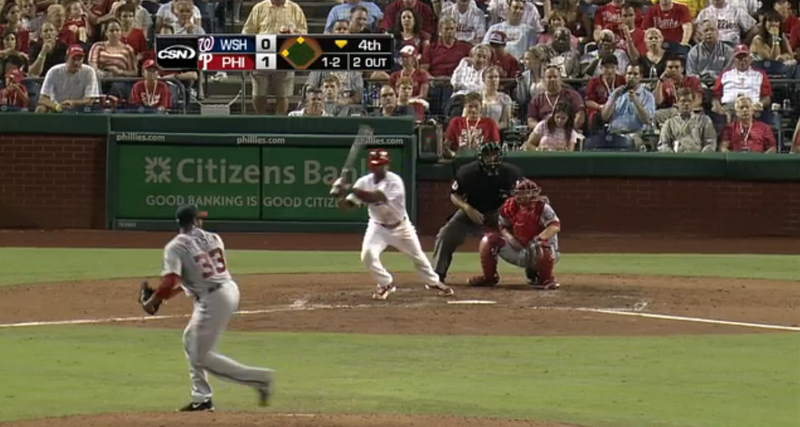 For a team that's 19.5 games back of their weekend adversary, they sure didn't play like it.

Kyle Kendrick has left us Phillies fans speechless lately. In his last two starts against Miami and Milwaukee, Kyle went at least seven innings, giving up no more than five hits, and he did not allow a run to score. He entered this game looking to continue his scoreless innings streak.

The Phillies hopped onto a 1-0 lead in the first inning. Jimmy Rollins scored on a single from Chase Utley.

They extended that lead in the fourth inning with a two-run double from Jimmy Rollins which scored John Mayberry and Laynce Nix. 3-0 Phils.

As previously stated, Kyle Kendrick has been spectacular. In his first siz innings, he allowed just three hits and one walk, striking out three. He was clearly outdueling Edwin Jackson.

In the top of the seventh, Kendrick walked Kurt Suzuki with two outs. The Nationals finally put up a run when Tyler Moore sent a ball to the first row out in left field. 3-2 ballgame.

Charlie Manuel was making some weird bullpen moves tonight. To start the eighth, Antonio Bastardo recorded one out, a strikeout to Bryce Harper. Then, Josh Lindblom came in and walked Ryan Zimmerman. Charlie then brought in Raul Valdes who gave up a hit to Roger Bernadina. Adam LaRoche struck out for the second out, and B.J. Rosenberg would come in after that to strikeout Jayson Werth. It took four pitchers, but they kept the score at 3-2.

Ryan Howard provided an insurance run in the bottom of the eighth with an RBI single which scored Chase Utley from second. 4-2 Phillies.

Jonathan Papelbon came into his third straight ballgame tonight. Paps retired the side, striking out two and picking up his 28th save.

Another 7:05 start tomorrow night as Gio Gonzalez will take the mound against Roy Halladay.