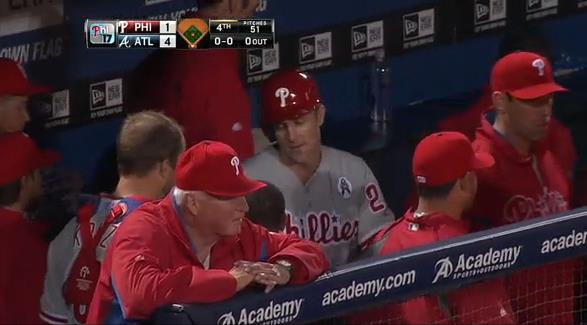 Atlanta hopped ahead to an early 2-0 lead in the bottom of the first inning. With Jason Heyward on base, Freddie Freeman brought him home with a two-run homer to right field.

The Phillies got a run back in the following inning after Chase Utley sent a ball deep to center field for his 200th career home run.

Chase Utley made it a 4-3 game in the top of the fifth with a two-run single (stretched into a double) which scored Cole Hamels and Ben Revere.

In the bottom of the inning, Justin Upton extended the Braves' lead to 5-3 with a solo shot to center field.

After five, Cole Hamels' evening was done. Hamels allowed five runs to score on seven hits, walking one and striking out five. Chad Durbin would come in to relieve him.

Durbin walked Uggla to start the inning, followed by a double to Chris Johnson. After Gerald Laird singled to score Uggla, Durbin was taken out for Jeremy Horst. Later in the inning, Reed Johnson grounded into a double play which allowed Chris Johnson to score. 7-3 Braves.

In the top of the seventh with one out, Chase Utley tripled to center field, and was later sent home by Ryan Howard on an RBI grounder.

Jeremy Horst pitched a scoreless sixth (all runs were charged to Durbin) and seventh tonight, allowing just one hit and striking out two.

In the top of the eighth, Erik Kratz shot a line drive to center which sent John Mayberry home from second base. 7-5 Atlanta.

Phillippe Aumont tossed a scoreless bottom of the eighth walking one and striking out one.

Craig Kimbrel came in to close it out for the Braves tonight. After getting Rollins to strike out swinging, Utley and Howard both popped-up.

The Phillies and Braves will continue the first series of the season on Wednesday night at 7:10 with Roy Halladay on the mound against Paul Maholm.