Phillies Lose An Ugly One on Opening Day, 13-4 to Royals 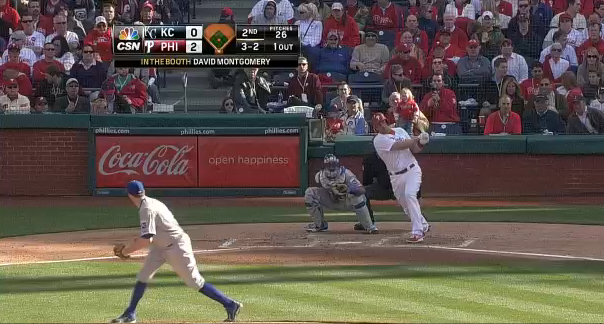 Today marked Opening Day at Citizens Bank Park, and it couldn't have gone much worse.

In the bottom of the first, Jimmy Rollins, Chase Utley, and Ryan Howard combined for three straight singles, Rollins was able to score on Howard's hit. 1-0 Phils.

Domonic Brown led off the bottom of the second, and took Royals' starter Wade Davis yard for a solo homer to right field. After Laynce Nix flied out, Erik Kratz hit a solo bomb of his own to left field. Kyle Kendrick followed with a single to left which was only a few feet short of a home run. 3-0 Phillies after two.

Chase Utley laced a double to the gap in left, and later stole third base with Howard up. Howard sent Utley home with an RBI single making it a 4-0 game.

Kyle Kendrick got into a jam in the top of the fifth after the Royals loaded up the bases with singles from Chris Getz, Miguel Tejada, and Alex Gordon. With two outs, Eric Hosmer brought home two runs with a line drive to right field. Kendrick finished the inning with a groundout, but the Royals had cut the Phillies' lead in half.

In the top of the sixth, the Royals loaded the bases once again, this time with a single from Mike Moustakas, a double off the bat of Getz, and an intentional walk of Billy Butler. After that, Charlie Manuel took Kendrick out for Jeremy Horst. Horst served up a fastball to Alex Gordon who drilled one to the gap in right-center, sending everyone home with a bases-clearing triple. 5-4 Royals.

For the third straight inning, the Royals loaded the bases after Horst walked Hosmer and gave up singles to Salvador Perez and Moustakas. With nobody out, Chad Durbin replaced Horst.

Durbin first gave up a sac fly which allowed Perez to score, then made it a 9-4 ballgame after Chris Getz tripled past a diving Domonic Brown in left to clear the bases.

Raul Valdes took the mound in the top of the eighth, and allowed a solo homer to Alcides Escobar to start the inning. Hosmer singled, Moustakas hit a ground-rule double into the 'pen, then Lorenzo Cain singled to make it an 11-4 ballgame.

With Valdes still in for the ninth, the Royals added two more runs to the board. Escobar doubled to bring home Gordon, followed by a double from Hosmer which scored Escobar.

The Phillies' lineup was up to a whole lot of nothing, which carried into the bottom of the ninth inning. Luke Hochevar closed it out for Kansas City, sending his team to a 13-4 victory over the Phils.

Tomorrow, John Lannan will make his Phillies debut against Luis Mendoza. They will square off at 7:05.