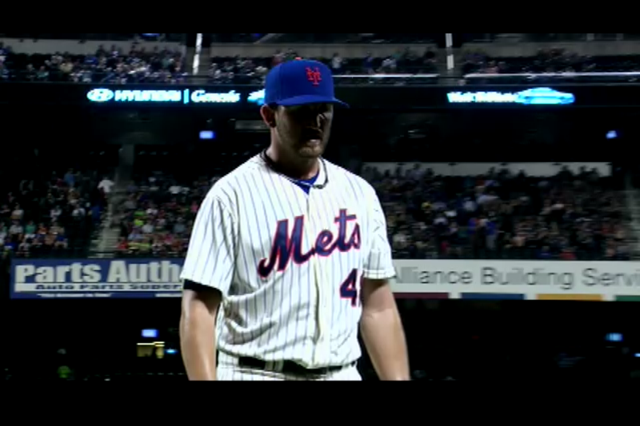 The Mets took the field at Citi Field on Marlon Byrd t-shirt night devoid of their former starting outfielder and starting catcher John Buck.   But that was not enough to keep the Mets from dominating the Phillies thanks to a stellar pitching performance from Mets starter Jonathan Niece, who tossed a complete game shutout.

The Mets got their offense from sloppy defense and the bat of their starting pitcher.  The Mets first run came after Kyle Kendrick walked Jonathan Niese in the third inning.  Eric Young bunted Niese to second, and Daniel Murphy drove Niese in on a single to center field.

Sloppy play in the sixth inning led to four more for the Mets.  Andrew Brown led off with a walk, and thanks to a throwing error by first baseman Kevin Frandsen, Ike Davis reached, putting runners at second and third.  Kyle Kendrick intentionally walked Juan Lagares to face Travis d'Arnaud, who hit a sacrifice fly to make it 2-0 Mets.   Then, Kendrick issued another intentional walk to Omar Quintinilla to face pitcher Jonathan Niese.  Niese doubled, clearing the bases to make the score 5-0 Mets.

Yes, that was four runs on just two hits for the Mets in the sixth inning.

The Phillies offense was limited to just three hits.  Two came from Michael Young, starting at third base.  The third came from shortstop Jimmy Rollins.  Rollins also in the ninth inning picked up a walk.  But that was it for the Phillies.

Kendrick was charged with the loss after giving up just one earned run.  Niese picks up the win, a complete game shutout.

The Phillies and Mets are back at it tomorrow night at Citi Field at 7:10.