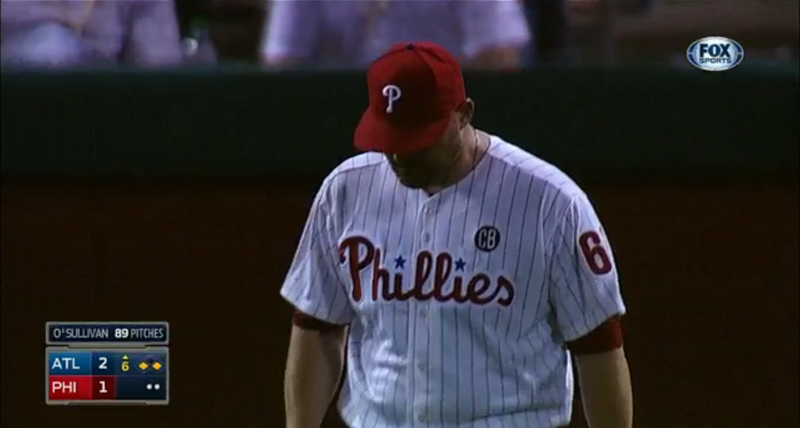 Sean O'Sullivan was the recipient of the Phillies minor league callup for last nights final game of the doubleheader with the Atlanta Braves. With six games set to be played in five day, the team needed a spot-starter. Headed into last night's contest, O'Sullivan had previously made 37 major league start for a combination of the Los Angeles Angels of Anaheim, the Kansas City Royals, and the San Diego Padres. With Lehigh Valley this season, O'Sullivan racked up a record of 3-6 with 87.2 innings pitched and an ERA of 4.31 (plus, a FIP of 4.36).

The Game: It got off to a bit of a rocky start for Sean O'Sullivan in the first. Jordan Shafer led the game off with a single, and the next to consecutive outs moved him around to third base. He had an opportunity to get out of the frame unscathed, but but a single by Justin Upton just over the head of Cesar Hernandez allowed Shafer to score, giving Atlanta the early 1-0 lead.

Just a couple of innings later, the Phillies would be able to tie the contest against the Braves' David Hale, making his fifth start of the season. Cameron Rupp and Ben Revere each singles in the bottom of the third inning to put runners on first and third with one away for Jimmy Rollins. A sacrifice fly out into right field was not the ideal outcome, but it brought home the team's first run, and it pulled the score even at one a side.

After the night was over, you could easily say Sean O'Sullivan was above average, as far as spot-starters go. Through five innings pitched, O'Sullivan had only allowed the one earned run, and was just two batters over the minimum from innings two through five. Even going into the sixth, the righty retired the first two batters. After that, however, the question "Did Ryne Sandberg leave him in the game too long?" began to spring up. With two away, both Justin Upton and Ryan Doumit cleanly singled off of O'Sullivan. Sandberg decided to let O'Sullivan to continue, but it wouldn't end well. The next batter, Chris Johnson, would single as well, bringing home Upton and spelling the end of O'Sullivan's night. Mario Hollands came in and allowed a double to Tommy La Stella, which moved O'Sullivan's final line score to read four earned runs.

The Braves would tack on another run in the eighth, when Ryan Doumit led off with a monster home run off of B.J. Rosenberg. 5-1 was the score after Doumit's third dinger of the season, and it would remain that way the rest of the game. The Phillies' less-than-stellar offense provided just six hits and a single earned run in a losing effort. It is their third loss to the Braves in two days time.

Impact: The offense strikes again. While the final box score reads four runs allowed for O'Sullivan, he pitched much better than that. Both is FIP and xFIP rated lower than his ERA of over six, suggesting O'Sullivan had a spectacular game. In the end, though, it was the lack of offensive output that resulted in not only a loss for O'Sullivan, but a series loss to a divisional opponent at home.

Up Next: A near must-win game for the Phillies, as they look to salvage at least one game against the Atlanta Braves. Rookie David Buchanan looks to stretch out his hot streak of starts, while the Phillies must continue to pound Aaron Harang as they have in the past. The game is set to begin at 1:35 PM Eastern.