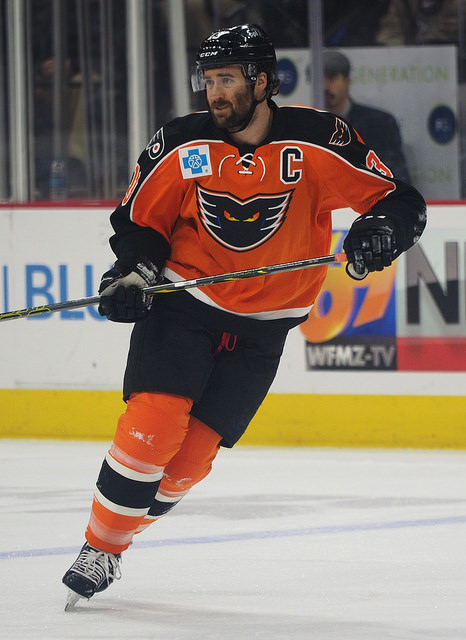 PPL Center was rocking for multiple reasons on Saturday night. One being that it was 80s Night at the Lehigh Valley Phantoms home arena.

The other was after a two-goal deficit was erased in the 3rd period as the Phantoms come out on top over the Springfield Thunderbirds, 6-4.

A night after he had to make 27 saves to secure his team the victory, Anthony Stolarz faced 22 shots in the first period alone Saturday night. The brunt of those shots would come on the only power-play opportunity of the period, which was given to Springfield after Robert Hagg went off for holding at 11:02.

The Thunderbirds hemmed the Phantoms into their own zone for a solid two and a half minutes, and despite the pressure, Stolarz was able to turn aside every shot he faced during the mayhem.

Springfield needed a deflection on a point shot to beat Stolarz, as a failed clearing attempt from Lehigh Valley ended up on the stick of Mike Downing. Downing wasted no time ripping a shot from the blue line toward the crease, where Logan Shaw got a stick on it from point-blank range to make it 1-0.

Springfield kept up the pressure, but Stolarz held them at bay making 21 saves to keep it a one goal game after 20.

An early 5-on3 chance for Lehigh Valley looked to be just what the doctor ordered, figuring the Phantoms red hot power play would get them back into the game. But early on, that wasn't the case, as Jakub Kindl beat Stolarz on a shorthanded breakaway to put the Thunderbirds up by two.

The Phantoms made up for their mistake with a power-play goal 30 seconds later off the stick of Greg Carey on a one-time blast from the point. Will O'Neill and Travis Sanheim picked up the assists on the tally.

Springfield looked to be in control yet again until a miscue from behind the net lead to a tie game at 10:04 of the second. An errant clearing attempt up the center of the ice was picked off by Danick Martel, who tapped the puck through the legs of Reto Berra to tie the game.

The Thunderbirds responded with another deflected goal in front of a screened Stolarz, tipped by Paul Thompson, to retake their lead at 15:23. They added a late power-play goal from Tim Bozon at 17:27 to make the deficit two yet again for the Phantoms. The goal came off a weak wrist shot from Bozon.

Springfield put up another 13 shots in the second, making their total for the game 35. Dominating play through 40 minutes, the Thunderbirds looked to put the game away in the third.

The Phantoms appeared to get the lead down to one early in the third. On a 4-on-4, Springfield was called for too many men on the ice, and the power play was on for the Phantoms. A shot from the point looked to go off the back bar and back into Berra before a net mouth scramble lead to the puck crossing the line after a whistle. The play was ruled no goal.

No review took place of the shot, but moments later on the same power play, Carey picked a corner for his second of the night to make it 4-3.

Another power play goal from Taylor Leier less than four minutes later tied the game at four. Leier ripped home an O'Neill point shot to send the 7,920 fans at PPL Center into a frenzy.

The crowd erupted again just 32 seconds later as Colin McDonald put the Phantoms ahead for the first time. Scott Laughton and Leier picked up the assists on the goal.

The Thunderbirds pulled the goalie late, looking for the equalizer, but it was Chris Conner who buried an empty-netter to ice the victory for the Phantoms.

The Phantoms rode the hot hand in Stolarz, and despite giving up 4 goals, he made 35 saves and kept the team in the game at every turn.

The Phantoms head on the road to Utica next Friday before returning to PPL Center next Saturday to face the Toronto Marlies.

Greg Carey on his two goal night and the team's slow start tonight: "Good plays by skill guys helped our PP click, and I just happened to find soft areas and got (the puck) away quick."

"We just have to play the game our way. They were taking it too us there, we looked up with 18 minutes left in the third and they had 36 shots. And that's not a good defensive game for us. So I think we slowed everything down and kinda got it back in our corner and they started taking penalties. We just gotta do what we do. Were a skilled hockey team, we don't have a lot of bigger guys. We have a lot of smaller guys who play with speed and skill and if we play that way, good things will happen".

Scott Laughton on how long his conditioning stint may be and re-adjusting to playing: "I know as much as you right now. I guess we'll find out, right now I'm not sure yet. We'll see what happens here. It was a good weekend for me to see what's going on."

"First game was a little bit tough, trying to get my legs under me, started to feel better as the game went along tonight, in the 3rd especially. Every period I felt better and I'm just trying to move forward."

"Confidence is a big thing in this league and the next level. So just trying to get my confidence back. Playing in the middle of the felt nice to get back in the swing of things. I've been itching to get back so it was nice to get in here with these guys".

Taylor Leier on how the crowds level of excitement can fuel a comeback like that: "Yeah, that's the best. Down 4-2 going into the third, and you're able to come back. And our fans are so passionate. When Mac [Colin McDonald] scored that fifth goal, feeling that rumble, it's awesome."