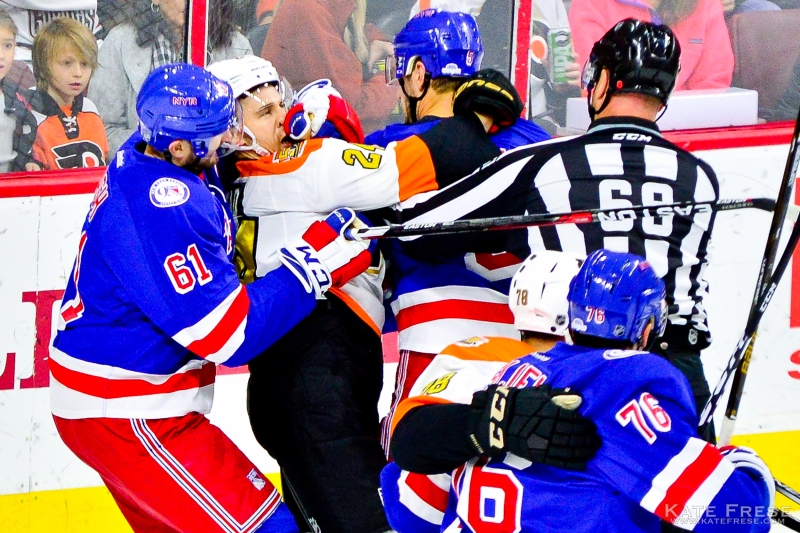 Dale Weise gave the Rangers a very early power play. Weise was given a four minute double minor for high stiocking just 17 seconds into the game. The Flyers penalty killers did an outsanding job in keeping the Rangers at bay for the entire four minutes and the teams returned to full strength with it still scoreless.

Four minutes later the game turned into the physical style hockey we are accustomed to seeing between the two teams. Brandon Pirri hit Brandon Manning from behind and was going to get a boarding call. Travis Konecny made him answer the bell.

Five minutes later the Rangers broke the scoreless tie. Derek Stepan took a pass in front and beat Steve Mason to give New York the 1-0 at 13:16. The play started when Scott Laughton turned the puck over behind his own net and J.T. Miller found a wide open Stepan who didn't miss.

The Rangers expanded their lead a minute and a half later. Matt Puempel took a pass from Jimmy Vesey at the Flyers blueline and went in alone beating Mason for his first of the season. Josh Jooris picked up the second assist.

The period ended with a spirited bought between Manning and Chris Kreider. The fight ended with Kreider landing a hard shot that sent Manning to the ice.

The second period was the Henrik Lundqvist show. The Rangers netminder turned away chance after chance through the first ten minutes.

The Rangers would make it 3-0 at 12:33 of the second. Kevin Hayes tipped in a shot from the point for his tenth of the season. Nick Holden had the lone assist.

The Flyers out shot the Rangers 10-8 in the period but found themselves behind 3-0 after forty minutes.

Chris VandeVelde cut the lead to 3-1 just 1:34 into the third period. VandeVelde deflected a shot from Andrew MacDonald past Lundqvist for his third of the season.

Shayne Gostisbehere got the Flyers to within one with 2:04 left in the third. Gostisbehere fired a shot from the point that found it's way home. Claude Giroux and Wayne Simmonds picked up the assists.

It was too little too late for Philly. Despite intense pressure over the final minute with the goalie pulled, they could not find an answer to Lundqvist and get the game tied.

The Flyers are back in action on Sunday night when they welcome the Calgary Flames to the Wells Fargo Center.