Eagles Flyers Phillies Sixers Union About Us Write For Us
The Phillies should still sign another veteran starting pitcher
After additions, Hellickson thinks Phillies can compete 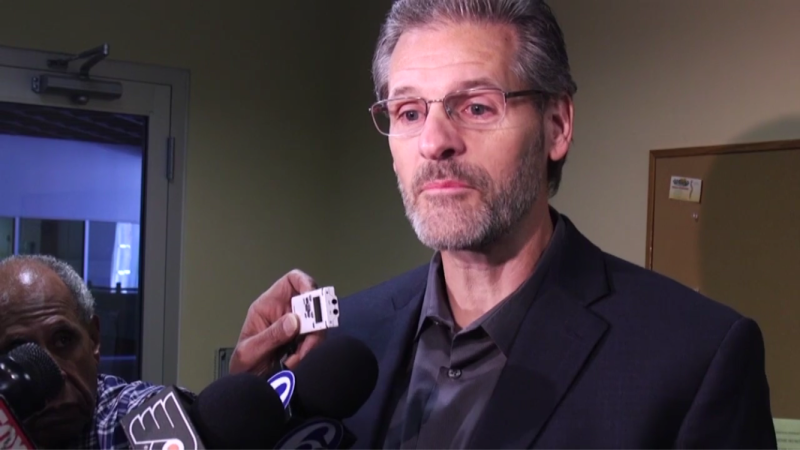 After one completed month of the NHL season, the Philadelphia Flyers are one of the highest-scoring teams in the league. On the opposite end, though, they are near the bottom of the league in allowing goals.

In that department, things only got worse for the Orange and Black after it was announced over the weekend that goaltender Michal Neuvirth would miss four to six weeks with a knee injury.

Now, the lion share of the next month will soundly be on Steve Mason, a load that has been heavily scrutinized by fans and the media alike.

The goalies have to be better, but it seemed like there was an expectation that Ron Hextall would crown Lehigh Valley Phantoms goalie Anthony Stolarz the savior of the team and season upon his call-up on Monday. Instead, the Flyers general manager defended his goaltenders to the media on Monday.

"You guys always seem to want a new body, a new face. That’s not our business," Hextall said. "Mason was really good last game. Let’s see where this goes. Mason’s been a good goalie for a long time. Neuvy’s been a good goalie as well. So because they’re in a little bit of a funk or we’re in a little bit of a funk. You don’t quit on them. You don’t go away from them. You stick with them. That’s the history of hockey.

"Mase and Neuvy had very good year last year. Their talent hasn’t left them, right? Their mental skills...nothing’s really changed. They’re in a little bit of a funk. They need to get out of it. Simple as that."

Hextall coming to his goalie’s defense is to be expected, though. Trashing Mason or Neuvirth or propping up Stolarz doesn’t serve the team well this early in the season. Remember, it’s only November.

However, none of this will stop fans and experts alike from clamoring for a new goaltender if one is available.

There are netminders who are reportedly on the trade block that probably wouldn’t be in a normal season. Yet, thanks to the upcoming expansion draft that will follow this NHL campaign, teams are going to have to reconfigure their goaltenders. One such team is the Tampa Bay Lightning who appear ready to move on from backstop Ben Bishop.

Acquiring a new goaltender, like Bishop, presents a whole new range of problems. How would the new netminder fit into the club’s long-range plan? Trading for and re-signing a Bishop would jeopardize Stolarz’s future with the Flyers organization.

But, never mind all that for a second, how much better would Ben Bishop make the Flyers right now? That’s what the fans care about.

Bishop’s campaign began in a little rough fashion. He’s had four games out of his 10 contests with a save percentage below .900. However, he’s had five quality starts compared to two really bad starts, according to Hockey Reference.

Yet, when Hextall says Mason and Neuvirth have been really good goalies, he’s not wrong. Mason’s .919 save percentage is only .002 points below Bishop’s total with the Lightning, who have been and continue to be an easily superior defensive team than the Flyers.

Also, Bishop is just as high maintenance as Mason or Neuvirth. Mason has been injured seven times -- this doesn’t account of his personal time off last season -- since 2013-14, while Bishop has been injured 11 times in that span. This includes the wrist injury that forced Bishop to sit out the 2014 first-round series against the Montreal Canadiens and the wrist injury that cost Bishop last season’s Eastern Conference Final.

Okay, so Bishop is the better goalie, but gets hurt more often. Bishop has finished second and third for the Vezina Trophy so if he’s available then the Flyers need to pursue him, right?

Well, Vezina caliber goaltenders aren’t cheap. Bishop carries a $5.95 million cap hit and will no doubt want a raise after this season. Both Mason and Neuvirth carry a $5.725 million cap hit combined. Not to mention, how much are you willing to give up for Bishop?

The Tampa Bay Lightning are a deep hockey team. So general manager Steve Yzerman is going to want add to their system while possibly helping the team now. He’s not going to want the players Flyers fans want to get rid of. Instead, think about having to give up any someone like Brayden Schenn or Mark Streit, a prospect like Travis Sanheim or Samuel Morin, then add Stolarz or Neuvirth as a thrown in to round out the goalie numbers.

That might not seem bad to Flyers fans, but for Ron Hextall, it betrays his process. A process that relies on rebuilding the farm system, developing players and not overreacting to solve single-season problems.

So you want Ben Bishop in the Orange and Black? It’s going to take a lot more than just one bad month of goaltending as Hextall to give up on the ones he has already.