Eagles Flyers Phillies Sixers About Us Write For Us
Eagles Continued Lack of Discipline Still Having Impact
Who is the Eagles Biggest Surprise This Season? 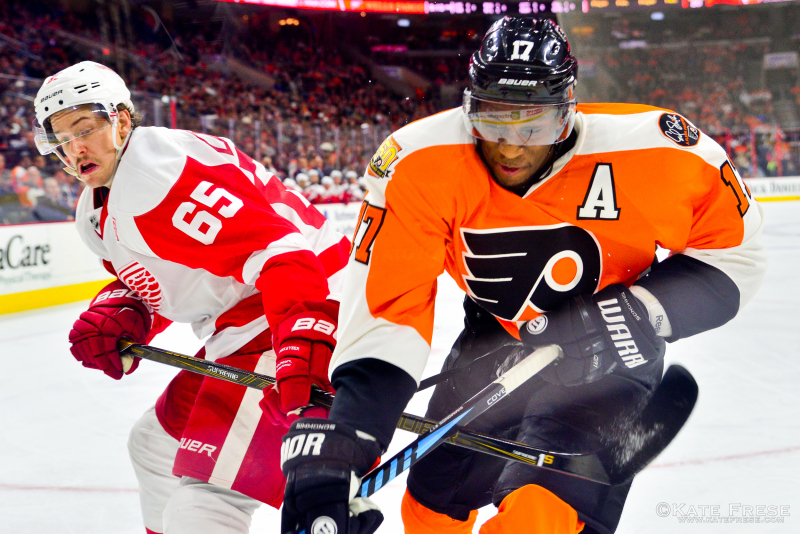 Is this the year the Philadelphia Flyers power forward Wayne Simmonds makes it to the NHL All Star Game? At the ripe old age or 28, Simmonds has become the on-ice powerhouse and leader the Flyers knew he could be.

Simmonds came to Philadelphia in the highly talked about trade with Los Angeles that sent former Flyers captain Mike Richards to the Kings. In return, Simmonds and top prospect Brayden Schenn, moved to Philadelphia. In hindsight, it could be one of the league’s most lopsided trades in history.

He wears the assistant captain’s logo on his uniform for a reason. Simmonds is a leader on and off the ice for Philadelphia. Up-and-coming Flyers players look up to him and seek his counsel. He leads through his example and his words.

He is also becoming more of an ambassador for the Flyers in the community as well. Simmonds is involved with charity work and appearing as a representative for the team at local events generating goodwill for his team and his community.

Simmonds, by far, leads the Flyers in goals at 16 and his 29 points put him only two points behind Jake Voracek and one point behind Claude Giroux in third place on the team. Overall, he is fourth in the NHL in goals scored behind Sidney Crosby's 21, David Pastrnak's 19 and Patrick Laine's 17. He also leads the league with eight power play goals.

During the Flyers current 10-game winning streak, Simmonds has racked up 10 points, six goals and four assists during that time. He also had back-to-back two-goal games against Florida and Nashville in the middle of the stretch.

Simmonds is tall and lanky, but he plays much bigger than he stands. At 6'2", Simmonds is taller than the average NHL forward, but weighs in at only 185 pounds. That does not stop him from playing as if he were closer to 220 pounds. When he sets up to the side of the net, he will not be moved aside. That is his office and he is the boss.

On the power play, he will establish position and everyone knows what is coming, but is unable to stop it. Giroux will pass him the puck and he will pivot and ram the puck to the net. It is nearly always Giroux’s first option on the power play.

If Simmonds is guarded, Giroux will pass up high or across and when the puck is shot, Simmonds crashes the net looking to jam home the rebound.

Simmonds is tenacious without the puck and will battle along the boards of below the net to get the puck. He can carry the team on his shoulders at times when needed. He will fight with all of his will to get the puck to the net or pass to a linemate for a scoring chance.

He is also more than willing to drop the gloves with opponents much larger than he if needed. He has never shied away from standing up for a teammate or energizing the team via an on ice fight. He rarely loses a fight either. Regardless of how much he is outsized by his fellow gladiator. He recently dropped Detroit defenseman Jonathan Ericsson, who stands 6'4" and weighs in at 220 pounds, with one punch.

Simmonds is getting much deserved attention in all star balloting.  He is currently fifth among the Metropolitan Division players in voting for the second straight week. Given his play all season and the unlikelihood that he would suddenly go ice cold, Simmonds should make his first ever appearance in the All-Star Game along with the rest of the elite players in the league.