Eagles Flyers Phillies Sixers About Us Write For Us
Altherr, Herrera to begin rehab in Double-A, Eickhoff placed on DL
Four storylines to follow for fourth preseason game 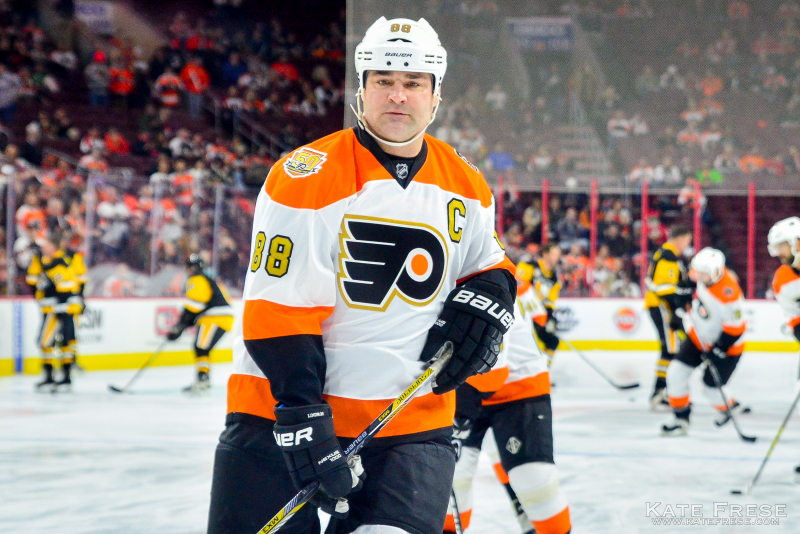 Statistically, Lindros' impact is still felt, as he sits in the top-10 of 18 major statistical categories. With the exception of games played, plus-minus (a flat stat, anyway), penalty minutes, shots and game-winning goals, Lindros is top-10 of just about every other significant category. Most notably, as per Hockey-Reference, he sits at eighth in goals (290), fifth in points (659) and seventh in goals created (256.9). He also leads the franchise in a pair of other stats -- points per game (1.36) and goals created per game (0.53). Essentially, he averaged a point in every game he played as a Flyer, and was directly responsible for more than half of a goal.

He also didn't just put up top-ten numbers, though, he recorded numbers with ruthless speed and efficiency. Of the 317 players to record 600 points, Lindros was the sixth-fastest to do so. He was the fifth-fastest out of 457 players that scored 500 points, and was the fourth-fastest to reach the 400- and 300-point plateaus. Only guys like Gretzky, Lemieux, Mike Bossy, Peter Stastny and Jari Kurri -- absolute legends of the game -- were faster, and that's not bad company to keep at all.

The Flyers have been quite picky about who gets their number retired, and Barry Ashbee notwithstanding, the main criteria seems to be that only players that have been inducted into the Hockey Hall of Fame can have their numbers retired. Lindros, of course, was inducted last year. Four of the five numbers in the rafters are Hall of Fame members, and 12 Flyers have been inducted -- seven of which, though, have been players who spent time in Philly but carved Hall of Fame numbers with other clubs. That leaves Lindros and Mark Recchi (to be inducted this year) as outliers, and Recchi's honor could possibly come soon.

When the Flyers made the long-overdue decision in 2011-12 to retire Howe's number (to this day, it remains criminal that 10 players wore No. 2 after he did), it came on the heels of Howe's induction into the Hall -- which, coincidentally, was also long overdue. Waiting for players to be enshrined absolutely makes sense, and with Lindros garnering that honor, raising his number to the rafters just naturally seems like the next step.

Sure, it's easy to knock the decision to retire his number. Lest we not forget, the acrimonious divorce between player and club in 2001 was brutal enough to make Game of Thrones look like a non-violent program. As Lindros sat out the 2000-01 season feuding with Clarke and demanding to be traded, it was easy to say that his legacy was tainted, or that he was being a diva. And as his parents intervened, it was easy to wonder why a grown man couldn't shake their management of his dealings. But as both men reconciled their differences in time for the Winter Classic Alumni Game in 2011-12, it was clear that time had healed all wounds.

Some may also decry the decision based on the fact that Lindros didn't lead the Flyers to a third Stanley Cup. He did help lead the Flyers to just one Stanley Cup Final, which ended in a disastrous four-game sweep to Detroit. But honoring players just on the basis of not hoisting the Cup is an insipid notion. Of the 598 players to lace up the skates for the Flyers, only 32 have hoisted Lord Stanley's Cup in the Orange and Black. Not exactly the deepest pool to pick from, though the organization has still been a prime contender in the years since. Lindros is among the many who have made significant contributions to the club without the luxury of lifting the Cup in a Flyers sweater.

As dominating a player as Eric Lindros was, he was equally as polarizing. He didn't half-ass anything, it was clear that conquering the hockey landscape was in his sights. This is evident by any of the various highlight videos available on YouTube. Much is made of the demands of a tough sports market like Philadelphia, and Lindros checked off all the marks.

Jan. 18 will surely be an emotional night in South Philly, and one that fans of all ages will remember for a long time. The Flyers will bestow their highest honor an all-time franchise great -- and it's an honor that's absolutely well-deserved.