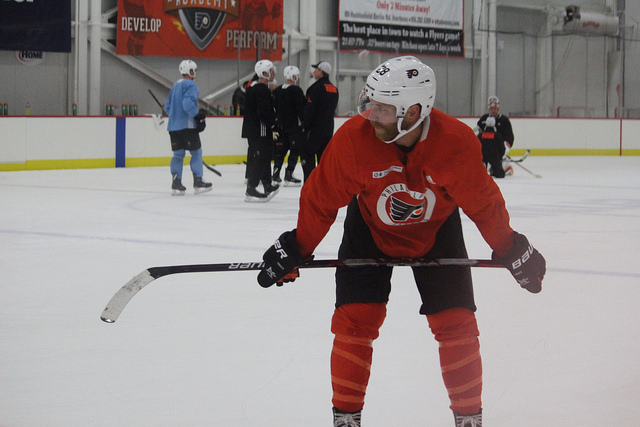 Flyers head coach Dave Hakstol hinted that there would be slight changes to the groups that skated on Monday, but there was very little different to those groupings on Tuesday.

While the groups remained heavily the same, the lines were not. Claude Giroux and Sean Couturier skated on the same line with Giroux playing the wing. The line of Oskar Lindblom, Nolan Patrick and Travis Konecny also skated together, just as they did for the team's first preseason game on Sunday.

Wayne Simmonds was also not on the ice for a second straight maintenance day. It is expected he will be back on the ice on Wednesday.

Taylor Leier filled in once again for Simmonds. The only other change to the groups was the addition of T.J. Brennan to Group 1. Travis Sanheim skated with Group 2.

The lines for Group 1 were as follows:

Goalies for the two groups remained the same as Monday, with Brian Elliott, Michal Neuvirth and Alex Lyon skating with Group 1.

The lines from Group 2 were as follows:

Leland Irving, Carter Hart and John Muse were the goalies in Group 2.

The Flyers morning skate times for Wednesday are still to be determined, but those sessions should give us a better idea of how the lines will stack up for that night's split-squad action against the Islanders. Expect a mix of players from both groups to appear at each of the games. Both games, taking place in Allentown and Brooklyn, begin at 7 p.m.