Hagg Has Inside Track on Blueline Opening with Flyers 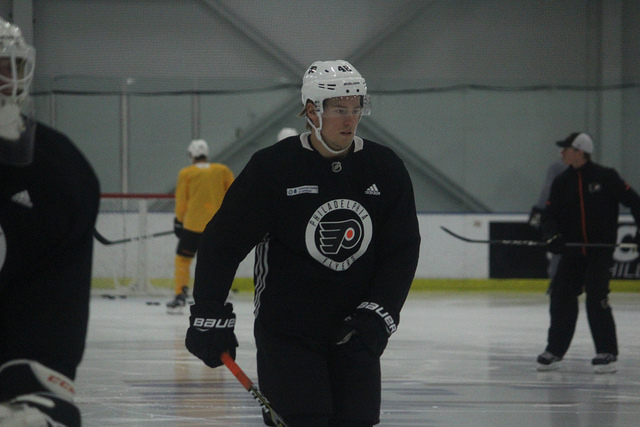 Flyers GM Ron Hextall made it clear that the 2017-18 roster would include two fresh faces on the blueline. Veterans Michael Del Zotto and Nick Schultz were not re-signed in the offseason and that created those two openings Hextall referred to.

At the end of last season, Sam Morin and Robert Hagg both made their NHL debuts. Both players were selected in the 2013 NHL entry draft and have been playing for the Flyers minor league franchise the Lehigh Valley Phantoms.

The behemoth 6'7", 230-pound Morin is almost certainly going to be on the roster come opening night. He would have to fall flat in the remaining exhibition games to end up back with the Phantoms.

That leaves one roster opening. The 23-year-old Hagg has played three seasons with the Phantoms and before that he was playing among men in the Swedish league. And that experience has him on the inside track to making the Flyers roster as well.

Hagg came up in the Swedish league gaining attention and success from an early age. He won multiple medals and awards as a teenager and achieved success playing in international tournaments for Sweden as well. Hagg was a staple as a teenager on the blueline for Sweden, playing against the best teenagers from other countries.

Playing at that level was a major reason for why he was so highly regarded going into his draft year. As an 18 and 19-year-old, he was playing against men and growing in talent and stature while garnering recognition internationally.

Hagg’s first year in the Flyers organization was pretty much as expected. He had a quiet, but solid year. He did not tally up the offensive numbers he saw in Sweden, but that is typical for a teenager transitioning to the North American system.

Hagg struggled in his second year with the Phantoms. He struggled to focus and push himself at times and was a healthy scratch several times throughout the season. Hagg worked with the coaches and trainers and was able to turn it around in the final 10-plus games, regaining his pre-draft and first-year poise and reliability.

Hagg picked up where he left off last season and played well all year. He had respectable offensive production, tallying seven goals and 15 points in 58 games, but he was much more reliable in the defensive zone going from minus-11 the prior year to plus-10.

His improved play caught the attention of Hextall among others.

"He came over as a 19-year-old, played up in Glens Falls in the American League and, at age 19, held his own," Hextall said last season. "As a 20-year-old, he was not bad. And this year he’s taken it to another level. He’s an all-situation, very dependable player."

As a result, Hagg made his NHL debut on April 9 in the Flyers regular-season finale against Carolina, a 4-3 shootout loss. Hagg displayed why many said he was NHL ready that spring. He played over 21 minutes and looked like he belonged on the ice with his Flyers teammates, poised and steady and keeping his game simple and reliable in his own end.

"Robert Hagg is probably NHL-ready now," McKenzie said, "He’s a guy that you could drop into your lineup right now and delete one of the other guys and probably not suffer too much."

All indications point to Hagg and Morin having the best chances of breaking into the roster this season. Players such as Travis Sanheim and Phil Myers certainly have higher ceilings and all-around talent, but having three years of professional experience as a young player provides a significant advantage for Hagg.

While he is not a flashy player and will not be a regular on highlight reels, Hagg has all of that experience and growth under his belt. He is solid in all aspects of his game, versatile and dependable, and can play on the penalty kill and the second power-play unit if needed.

He is poised in his own end and is a smooth skater who looks to transition quickly. He has a good first pass or can skate the puck out of the zone. He will not put up substantial offensive numbers, but he has a hard and accurate shot from the point.

Hagg should be a solid third-pair defenseman for the Flyers this season and factor into the team's roster picture in years to come as well, giving them just another defensive prospect to boast about as the future takes shape.