Eagles Flyers Phillies Sixers About Us Write For Us
Analyzing the Flyers (Almost) Final Roster
Eagles Armchair: In West Philadelphia...

Farewell to 'The Voice,' Dave Strader 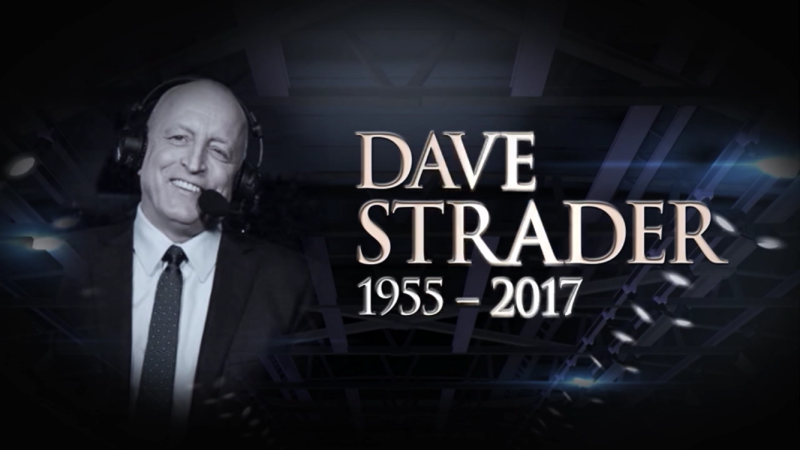 There are often times in life when we are told something good or even bad. For Dave Strader, luck was unfortunately not on his side on June 13, 2016 when he was diagnosed with cholangiocarcinoma, a rare form of bile duct cancer.

He would go on to miss 283 days before calling his first of five games of the 2016-17 season on Feb. 18, 2017. The Dallas Stars took on the Tampa Bay Lightning in a game that ended up going to overtime. It was fitting that Stars captain Jamie Benn would go on to score the game-winning goal in overtime to secure a 4-3 victory for Dallas.

As soon as the team was done celebrating, they did something that will be in remembered forever. They skated over towards the boards, looked right up at Strader in the broadcasting booth, and saluted him with their sticks held up high.

Strader was one of the best-known American broadcasters in all of hockey and had been doing so for 38 years. Strader went on to join the elite likes of Mike “Doc” Emrick, Bob Miller, and the late Gene Hart, among others, as the most honored and iconic voices of our beloved game.

The man known as "Strades" and also simply "The Voice" passed away on Sunday, just three days before the start of the 2017-18 NHL season. He was 62.

Strader was a two-time New York State Broadcasters Association honoree and even named the AHL's top public relations professional in 1984. Strader eventually got the call the NHL in 1985 after spending six years with the Adirondack Wings, the AHL affiliate of the Detroit Red Wings, as the new TV voice in Detroit, where he was paired with Mickey Redmond and did so until 1996. The two of them together were an iconic duo behind the mic while in Motown.

He would go to on to broadcast national hockey telecasts for ESPN, ABC, FOX and multiple other outlets as well as spending time with the Florida Panthers along with the Phoenix Coyotes. For almost two decades Strader also broadcast the Stanley Cup finals to a worldwide audience on NHL International.

In 2011, he then left his position with the Coyotes to accept a full-time job with NBC and Versus, but returned to team work again in 2015, when he was named to replace the retiring Ralph Strangis with the Dallas Stars after his 22-season run as the Stars TV voice.

On April 17, 2017, Strader was presented with a tremendous honor as the Hockey Hall of Fame announced that he was the 2017 recipient of the Foster Hewitt Memorial Award for "his outstanding contributions to play-by-play broadcasting of the game of ice hockey during his professional career."

When asked about what he remembers best about Strader, "Doc" Emrick had this to say about his fellow broadcaster.

"Nothing but smiles in recollection of him," Emrick said. "Our first time meeting was at the Glens Falls Civic Center -- since re-named. It was the first year of the Adirondack Red Wings and what a great job for a local guy to get with the new pro team. He was a terrific announcer but a wonderful guy to chat with about the present and past and -- whenever I would ask him about people in Glens Falls from the 1970s -- he would always know about them. He never forgot his home base. And, this is with the Winter Classics, the many Stanley Cup finals he did around the world, the all-star weekends, plus the other sports. He had the credentials to act like a big shot. But it was not him. He was kind, approachable, and the same guy who remembered riding busses and three and a half-hour bench-clearers in Portland. All of hockey will miss him."

You can watch NHL Network's tribute to Strader below.

The entire Flyerdelphia staff would like to express our condolences to the Strader family in these very difficult times. If you have any great memories or share any stories of Dave Strader please feel free to comment below. You will be greatly missed by the hockey world, "Strades."