Eagles Flyers Phillies Sixers About Us Write For Us
Sixers looking for revenge against the Rockets in Houston
Flyers-Coyotes: Postgame Review 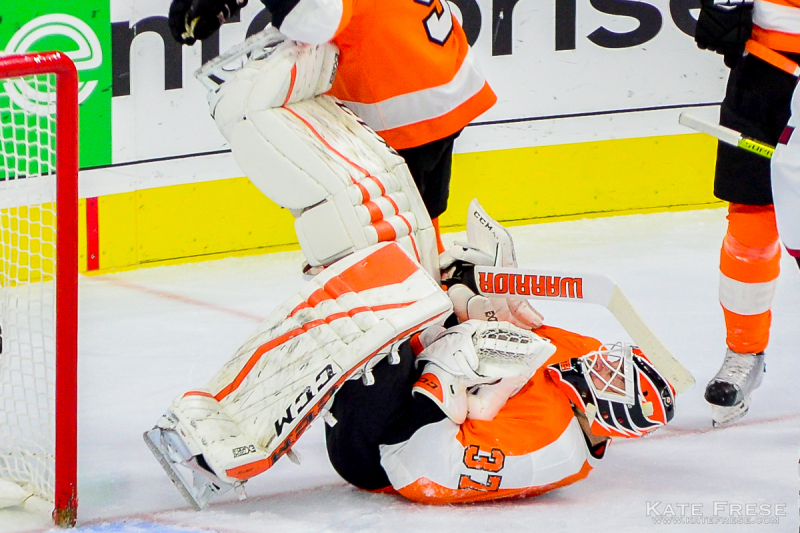 The Philadelphia Flyers were all tricks and no treats as they fell 4-3 in overtime to the Arizona Coyotes.

On the night before Halloween, fans thought they were in for a late treat but the trick was on the Philadelphia Flyers as the team lost in overtime 4-3 in a classic trap game against the Arizona Coyotes.

The Flyers played poorly through most of the contest. However, down 3-1 they completed the comeback with two late goals. Jordan Weal made the scored 3-2 after capitalizing on an Ivan Provorov rebound. Then forty-some seconds late Sean Couturier scored his second off a Claude Giroux feed.

Yet, in the three-on-three overtime, Travis Sanheim made an indecisive play in the offensive zone which allowed the game-winning rush to unfold and, ultimately, led to the winner by Alex Goligoski.

This was another contest that the Flyers allowed the team to jump out ahead and had to chase the game throughout.

In the opening frame, after a backhander by Brad Richardson, Niklas Hjalmarsson's quickly sent a cross-ice feed to a wide-open Jordan Martinook, who barely got the puck past a diving Brian Elliott. Martinook was left all alone thanks to a communications error between Travis Sanheim and Mark Alt. Alt abandoned the left side to cover the right, his assigned spot. However, Sanheim didn't move over to the left. Though, the rookie may have been expecting Alt to remain on the right side until the team got out of danger.

Christian Dvorak put the Coyotes up by two when Oliver Ekman-Larsson found him with a slap pass in the right circle. Elliott reacted early to the slap pass which put him out of position and allowed Dvorak to put the puck in the net. This put the Coyotes up 2-0 through most of the game.

The Flyers and Coyotes traded power play goals in the final frame. Brendan Perlini sent a wrister from the left circle above Elliott's glove to give the Coyotes a 3-0 lead. Shortly thereafter, Couturier put the Flyers on the board after Giroux found him open in the slot to put the Flyers back within two.

The Orange and Black were listless throughout the game firing only three shots in the first period and didn't draw their first power play until the third period.

The Coyotes gained their first win of the season despite a goaltending carousel that saw the team waive Louie Domingue, place Antti Raanta on injured reserve, recall Hunter Miska from Tucson and acquire Scott Wedgewood from New Jersey in the days leading up to this game.

Wedgewood had the best seat in the house for the opening period but had to make a few solid stops afterward. He stopped 28 shots while Elliott made 30 saves on 34 shots.

The loss for the Flyers makes for a fitting first win for Coyotes head coach Rick Tocchet as his team took away much of the room against the franchise that drafted him into the league back in 1983. While Tocchet cannot be happy with the way his team finished the third period, they managed to escape Philadelphia with a victory.

The Flyers will hit the ice once again on Wednesday night against the Chicago Blackhawks from the United Center. The game will mark the first of a back-to-back situation against Western Conference powers as Philadelphia faces the St. Louis Blues the very next night. Both contests are scheduled for 8 p.m.