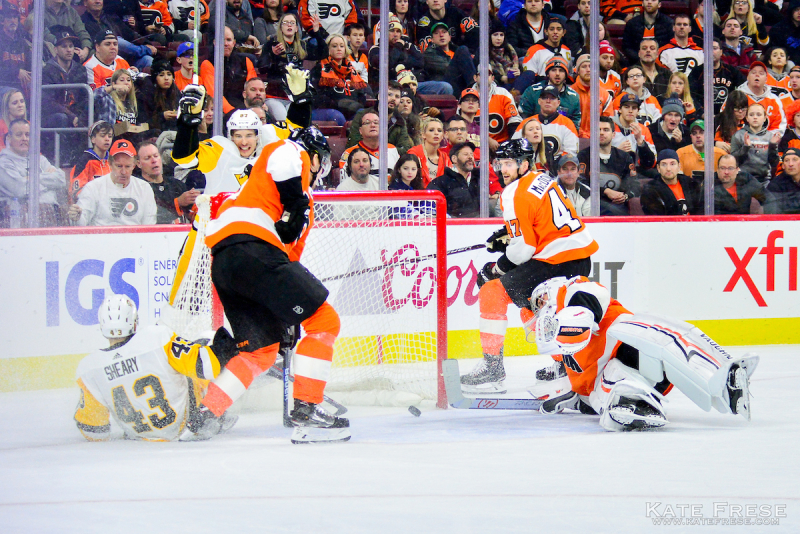 On the night after a snowstorm blew through the Philadelphia area, the Flyers power play was ice cold as well.

The Pittsburgh Penguins once again handed the Flyers a familiar result, defeating the Flyers for the third time this season, 5-2, at Wells Fargo Center on Wednesday night.

The Flyers had some of the better chances at even strength early, but the first period was dominated by special teams play. The Flyers took four penalties to put the Penguins on the power play four times in the opening 20 minutes.

They successfully killed off the first minor and on the next two actually drew penalties on Pittsburgh to nullify the rest of the man-advantage. The Flyers failed to score on both of their abbreviated power plays.

On the fourth man-advantage for Pittsburgh, they were finally able to cash in. A failed clear got the Flyers out of sorts, and that allowed the lethal Penguins power play to get their quick passing game going. Sidney Crosby got the puck down low to Evgeni Malkin and he was able to go across the front of the net to Phil Kessel cutting in for an easy slam-dunk goal with 1:25 left in the first period to give the Penguins the lead.

Pittsburgh outshot the Flyers, 11-8, in the opening 20 minutes.

The Flyers came out with plenty of energy to open the second period and that translated to offense.

First it was Nolan Patrick and Jake Voracek teaming up to tie the game. Patrick intercepted a clearing attempt and tried to give and go with Voracek. Voracek's centering pass back to the slot actually hit Derick Brassard's stick and deflected in to tie things up.

The Flyers took the lead just under four minutes later. Travis Konecny got a chance at the side of the net and jammed at the puck as it sat against Tristan Jarry's pad. The relentless pressure from Konecny lifted the puck up Jarry's pad and in to make it 2-1 at 5:59.

The Flyers controlled the first nine minutes of the period, outshooting the Penguins, 8-3. But Pittsburgh pushed back in the last half of the period.

Jamie Oleksiak was able to even things up with a point shot through a screen at 9:24. The Flyers challenged for goalie interference, but the call was confirmed.

Five minutes later, the Penguins got a two-on-one with Crosby leading the charge. Crosby took a shot that Petr Mrazek stopped, but left a big rebound for Conor Sheary to backhand in to give Pittsburgh the lead back.

The Flyers had two power plays in the period, including one just after Pittsburgh had taken the lead to try to get back on the board. Not only did they fail to score, but Pittsburgh's push back added another goal to their total before the second was up.

After a prolonged shift in the defensive zone and a failed clear, a shot by Jake Guentzel from the slot hit off the leg of a Flyers defenseman and went right to Sheary, who scored from a sharp angle to make it 4-2 at the end of the second period.

The Flyers struggled to get any momentum back in the third period. They had a power play midway through the period, but wasted the opportunity, making them 0-for-5 on the night.

Malkin scored with 1:39 to play into an empty net to seal the result.

The Flyers are back on the ice on Thursday night to face the Boston Bruins. Game time is 7 p.m.