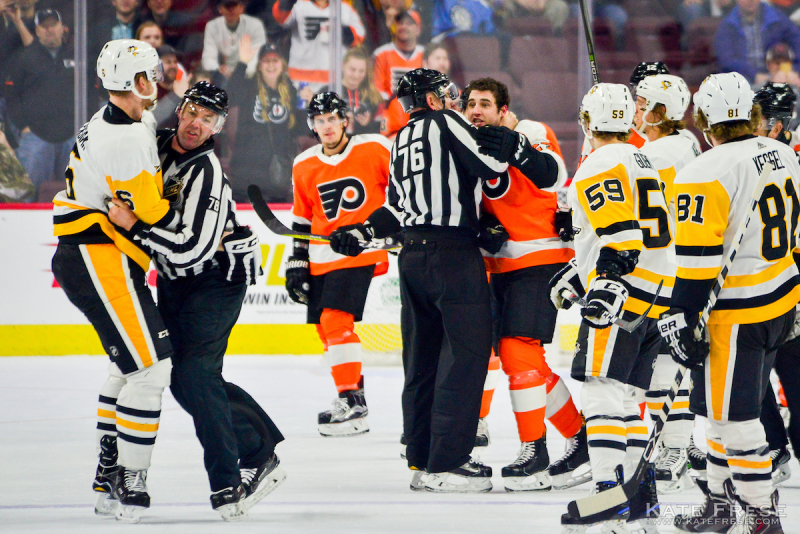 Things keep going from bad to worse for the Flyers, as they dropped yet another game to the Pittsburgh Penguins on Wednesday night, 5-2.

That's now four straight losses for the Flyers, who are suddenly going through the motions of these games and falling into some of the same bad habits that led to a 10-game losing streak back in November.

Let's get to it with our Postgame Review.

"We just got to keep it simple. We're overcomplicated things. They’re a good team. They took advantage of our mistakes." - Flyers forward Wayne Simmonds

"We should have walked away with two points in Tampa, we didn’t, we let it slip away. In Florida, we got outplayed. Today, I would take the lead away. In my opinion, I don’t know what you guys saw up there, but like I said we’re playing good teams right now that are on top of the standings, with a lot of experience so sometimes it shows that we are not there yet. Like I said, we are still in the hunt for a spot, obviously it was a big game today, but we’re still not there, so we gotta make sure we find a way around some points." - Flyers forward Jake Voracek

Travis Konecny's hard work pays off as he jams the puck up and over Tristan Jarry's pad to put the Flyers ahead.

Through two periods, the Flyers actually played a pretty solid game at 5-on-5. There was really no flow to the first period with so much power play time, and that also led to Pittsburgh's first goal. The second period was heavily dominated by the Flyers for the first nine minutes before Pittsburgh pushed back and took an insurmountable lead into the third. But it was the third period, where the Flyers had a 44.44 CF% at 5-on-5 and 51.52 CF% at all situations that was alarming. In a time when everything needed to be on net, the Flyers actually made things easy on Tristan Jarry, taking just 12 shot attempts in the final period.

Stat of the Game
Sidney Crosby had three assists, reaching 1,100 career points, and Evgeni Malkin had a goal and an assist. If you can't contain a teams best players, especially Pittsburgh's, it's probably going to be a long night. That's three long nights for the Flyers against the Penguins this season.