Eagles Flyers Phillies Sixers About Us Write For Us
Despite excitement, Jake Arrieta comes to Philadelphia with red flags
Flyers March to Playoffs Taking a Worrisome Tumble 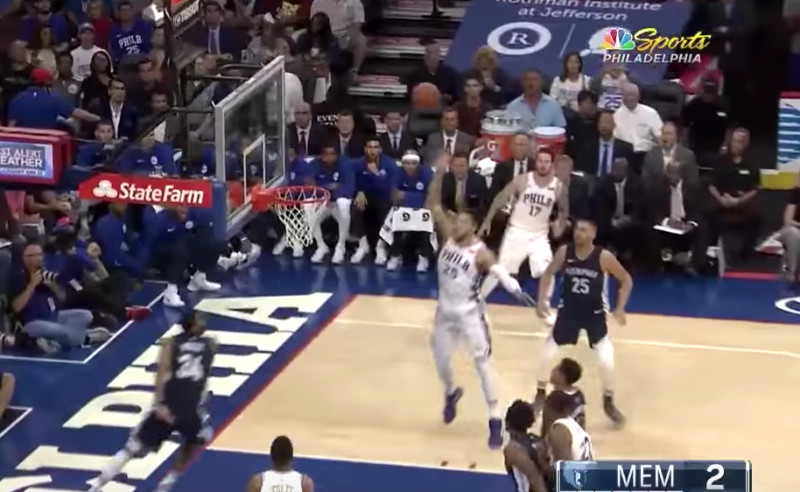 Spring has sprung and.....it's snowing in much of Eastern Pennsylvania, but the Philadelphia 76ers (39-30) still have to go to work, as they host the Memphis Grizzlies (19-51).

So get your snow boots and jackets on and be safe and cautious getting to the game, as SportsRadio 94WIP's Jon Johnson reported that the team still expects to play tonight's game despite the weather.

Normally for a game against a team that is struggling as bad as the Grizzlies are right now, there aren't a whole lot of storylines surrounding this particular game.

But for the Sixers, play as of late has been so good and so historic, there are countless things to be excited for and things to hype.

The Grizzlies have lost 20 (!!) of their last 21 games. Additionally, they have been downright awful on the road, losing their last 15 games.

They were able to snap a putrid 19-game losing streak by defeating the Denver Nuggets on Saturday. The craziest part about the Grizzlies losing all of these games is that they were a 43-win playoff team just last season. They lost their head coach, David Fizdale, who lost his job, as well as a ton of key players to injury.

This Grizzlies team is nothing like they were the last few seasons and are a lot younger than the veteran team they have been.

The Sixers, coming off of three straight wins, have themselves a good shot of knocking off the NBA's second-worst team on Wednesday night.

Yeah, that's a thing. The Sixers finally, after all these years of tanking, have a chance to win 40 games in a season tonight.

That's a win total that literally no one saw coming.

Vegas set the Over/Under at 40 for the Sixers at the beginning of the season, and with all doubt around the health of Joel Embiid and the chemistry of the new team, it seemed like 40 wins would be a stretch for such a young team.

Even our staff here at Sixerdelphia (myself included) greatly underestimated the amount of success the Sixers would have this season. Only Dante Nelson and myself had the team over the 40-win mark, and only at 41-41. It's apparent now that the Sixers are going to get over that hump in what's likely to be a whole lot more.

Fox Sports' Colin Cowherd might just be the most notorious doubter of all, who said the Sixers wouldn't even reach the 40-win plateau. He ultimately made a bet with a fan that could lead him to wearing a Sixers jersey on his show on Thursday.

Ben Simmons and Joel Embiid are the undisputed leaders of the Sixers we know and love. They bring so much passion and leadership to a team that will one day rise up and be one of the best in the NBA.

This season is viewed as a growing year for both players, Simmons a rookie in the league, Embiid in his second-season.

On Monday against the Hornets, Embiid became the first Sixer since Charles Barkley in 1991 to have back-to-back games of 20+ points and 19+ rebounds. (Update: According to NBAStats, a stat correction gave Embiid 20 rebounds instead of 19 vs. Charlotte on Monday. Embiid is the first Sixer since Samuel Dalembert on January 5, 2010 to record a 20 point, 20 rebound game).

So with the Sixers entering uncharted waters, searching for win No. 40 on the year, they also have two players making history in their own rights. The doubt on whether Simmons would be competitive for the big moments as the season winds down is slowly fading.

As the pressure builds, the guys that need to step up the most are stepping up in the largest way possible. The Sixers look like they are in good shape to be a team that could make noise and turn heads in the playoffs.

I'm not saying that what Joel Embiid has accomplished this season isn't impressive, but he really has improvements to make if he wants to take his game to the next level.

The guy is already an All-Star in his second season in the league, and like the point states before, Embiid's success at his position is historic in both the franchise and the NBA's history.

The Sixers are averaging 16.3 turnovers per game this season, one the league's worst for turning the ball over. Of those, Embiid has a team-high 3.9/game.

But the 3.9 number has been growing quickly the past couple games. Embiid had nine turnovers against the Hornets on Monday.

When you have games of 20+ points and 20+ rebounds, and the rest of the team is clicking, the turnovers don't seem to matter as much. But some games, you definitely won't get as lucky. The Sixers are going to need to be more proactive with their ball-handling especially come playoff time, when teams will absolutely kill you for turning the ball over.

The quest to gaining an Eastern Conference playoff spot is definitely heating up as the season comes down to the wire. The Sixers have 13 games left this year, most of them coming against mediocre teams.

Tonight, most of the teams the Sixers are jockeying for position with are in action.

The fourth-place Pacers are in New Orleans.

The fifth-place Wizards visit the Spurs.

The seventh-place Heat are in Miami against the Knicks. They currently trail the Sixers for sixth by two games.

And the eighth-place Bucks visit the Clippers, trailing the Sixers by 2.5 games.

A win and a Pacers loss puts them in a tie for the fourth seed. The Cavs are just a half game above the Pacers in third.